Lifeline Inishowen to hand 1,000-signature petition to Dáil in search for urgent funding 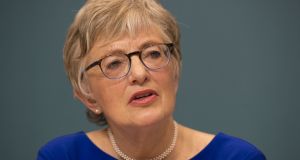 Minister for Children Katherine Zappone: to receive petition from Lifeline Inishowen in Co Donegal seeking funds. The Carndonagh-based service, for women and children affected by domestic violence and abuse, is the only one in the Inishowen peninsula. Photograph: Dave Meehan

Women’s lives in one of the most isolated parts of the country could be lost if a domestic violence service is forced to close, its manager has warned.

Mary Doherty, manager of Lifeline Inishowen in Co Donegal, will travel to Dublin this week with women who have used the service, to plead for urgent funding.

They will deliver a petition of 1,000 signatures to Minister for Children Katherine Zappone at Leinster House on Wednesday.

The Carndonagh-based service, for women and children affected by domestic violence and abuse, opened in 1996 and remains the only one in the Inishowen peninsula, which as a population of 40,000.

The nearest similar service is in Letterkenny, 60km and a two-hour round-trip away for those with cars.

Tusla has contributed €3,200 a year to Lifeline since 2010, when the Health Service Executive withdrew funding. Further costs are covered through fundraising and donations.

Funding for 2019 was completely withdrawn on the grounds there were other services in the county – the Donegal Women’s Domestic Violence Service and Donegal Women’s Centre (DWC), in Letterkenny.

The DWC provides counselling in Letterkenny and outreach clinics in Falcarragh, Dungloe, Ballyshannon, Killybegs and Carndonagh. Ms Doherty argues, however, that Lifeline is open in Carndonagh five mornings a week, making it far more accessible, especially to the most vulnerable and poorest women and their children, in the peninsula.

Among those travelling to Leinster House on Wednesday is Caroline (who did not want to give her surname). She was in an abusive relationship for seven years with a man whom she thought was “just perfect” when she met him.

“He was so good to me, so devoted, but also very intense, but was besotted.”

Quickly, however, he showed signs of being controlling – after small arguments he refused to answer calls or texts for days, making her feel she was “totally at fault”.

“He broke my confidence bit by bit, made me feel I was lucky to have him. I kept thinking ‘If I just try harder.’ He had me convinced no one else could love me like he did, and inside I was dying.”

Her GP referred her to Lifeline. A single mother, she was able to go for counselling when her son was at school, a vital consideration. “They built me up, effectively saved my life.

“There are things that happened in that relationship that to this day I struggle to tell even people close to me. But I was able to tell my counsellor and eventually leave that toxic time in my life behind.”

Ireland ratified the Istanbul Convention – an international instrument to combat domestic violence – last year. Among its tenets is that effective policies must involve government agencies and NGOs, as well as national, regional and local services that must be accessible.

A spokesman for Tusla said: “Donegal Women’s Domestic Violence Service has been identified as the primary organisation delivering domestic violence support services across CoDonegal, including Inishowen ... At this time, Tusla is not seeking to commission additional services in Co Donegal.”