‘Complacency set in, people thought they had the Covid pandemic beaten, and they socialised’ 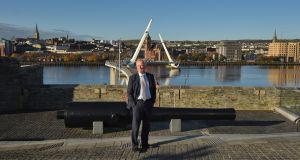 Derry and Strabane are the top of the league table nobody wants to win. In the past month the rate of coronavirus infection in this council area in the northwest has shot up to one of the worst on these islands, if not further afield; a fall from grace made all the starker by the fact that for most of the past six months its rates were consistently among the lowest in the North.

“It’s very straightforward,” says Derry GP and chair of the British Medical Association’s Northern Ireland Council Dr Tom Black. “Complacency set in, people thought they had the Covid pandemic beaten, and they let their guard down and they socialised, and they had parties in houses and they went out and ate meals and had christenings and First Communions and hen parties and they did it cross-Border, here and in Donegal.

“They created a problem, and now they have a problem to fix.”

Such behaviour was not exclusive to Derry; the difference was, he says, that “we started off from such a low level...we had a very successful first wave of the pandemic. Success leads to complacency, complacency leads to failure.”

Dr Gerry Waldron, the head of health protection at the North’s Public Health Agency (PHA), looks at the question in a different way. “Why not Derry and Strabane? What was happening beforehand that kept it relatively safe compared to everywhere else?”

For Dr Waldron the change was travel to their neighbour Donegal, which also experienced a sharp rise in cases after a relatively quiet first wave, and moved to Level 3 restrictions on September 25th.

'Derry is sort of a place apart anyway', with a 'sort of a genial disrespect for authority' – whether from Stormont, London or Dublin

The interconnectedness of people’s lives on both sides of the Border, he says, then spread the infection throughout the area.

Behaviours are also similar. “In other areas [of the North] we’ve seen large clusters...accounting for high proportions,” says Dr Waldron; in Derry and Strabane there are “very small clusters associated with workplaces, hospitality, parties”.

“My understanding is it’s exactly the same on the other side of the Border. They’re not seeing huge big outbreaks, they’re seeing just generalised household, small clusters.”

In total PHA has recorded 44 clusters of more than five people since the beginning of the pandemic; three of these were in Derry and Strabane, compared to 12 in Belfast and nine in Newry, Mourne and Down.

The North’s chief scientific adviser, Prof Ian Young, told BBC Radio Foyle this week that “almost certainly there were one, two, maybe three what we call super-spreader events” where somebody who was particularly infectious came in contact with a large number of people.

Exactly when and where these took place, experts are unsure. Sources cited a wedding in Co Donegal attended by people from both sides of the Border; small local bars packed with regulars who subsequently contracted the virus; and house parties.

As of October 11th, the police have fined 232 people for breaching the Covid-19 regulations in Derry and Strabane, the majority of whom are understood to have been young people attending house parties.

Six prohibition notices have been issued to licensed premises, and 18 to householders for gatherings in private homes.

Wakes have also been held which breached the Covid-19 rules, but there is no indication these have resulted in a large number of cases.

Those family and community ties are strong here; veteran journalist Eamonn McCann describes the west bank of the Foyle as a “very together place” and, though stressing that this is speculation, asks if there is “something cultural about the way people stick together, and literally stick together, for all sorts of historical reasons?”

Others have made a similar observation; said one son of an elderly parent, “The advice might be to stay away, but I couldn’t hold my hand up and say I would”.

For McCann, “Derry is sort of a place apart anyway”, with a “sort of a genial disrespect for authority” – whether from Stormont, London or Dublin.

The fallout following the presence of the Sinn Féin leadership and party members from the northwest at the funeral of Bobby Storey in June – which breached both the regulations and the guidance in force at the time – and its impact on public messaging has been well-documented; people have also absorbed the controversies around Dominic Cummings, and the Clifden golf dinner.

The opposition to mask-wearing by Dr Anne McCloskey, a popular retired GP and Aontú councillor in Derry, may have had an impact, though to what extent is difficult to quantify.

The answer is “never simple”, says Dr Waldron. “These things are always multi-factorial, and how much it is, how much it isn’t, will we ever know?”

The current rates in Derry and Strabane, he says, are “an indicator of generalised prevalence within the population, as opposed to a proportion of the population behaving badly and ignoring the guidance.”

Probably the “root cause”, he says, is people failing to follow the guidance, “because if everyone was keeping a social distance and everyone was isolating when they should be then we wouldn’t be in the situation we’re in now”.

He says it is too early yet to see if the restrictions introduced in Derry and Strabane on October 5th have allowed the area to turn a corner; anecdotally it appears that the more relaxed attitude of the summer is long gone.

“I think Derry ones know that they’re in deep trouble, and they’ve copped on to it,” says Dr Black.