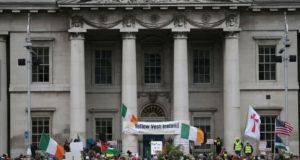 The Catholic Archbishop of Dublin, Diarmuid Martin, has expressed concern that anti-mask protesters are a dangerous influence on young people when denying that there is a pandemic.

Public health was about responsibility, but there were people who protested out of a lack of responsibility and some protested because of ideology linked to other agendas, he said on Newstalk’s Pat Kenny show.

The archbishop spoke of his time as the Vatican’s diplomatic representative to UN organisation in Geneva, including the World Health Organization. “I was there when there was the Sars outbreak.” Experts he had spoken to at the time said countries should be ready for an outbreak, “and most of us were not.”

There had been an attitude that if a disease arose, there would be a vaccine quickly, but that was not the case with Covid, Dr Martin said, adding when it came to public health, personal responsibility was important.

Dr Martin said that the “very aggressive” people who had attacked his car when he attended Eid celebrations in Croke Park clearly did not understand what religious tolerance meant.

The archbishop said the people who organised and attended anti-mask rallies were very organised and he was worried that might have an influence on young people.

Elsewhere in Europe young people were being influenced by neo-Nazis, and he was concerned they were denying there was a pandemic, he said.

When he was attacked in his car outside Croke Park he said he could hear background music with “hymns to Our Lady”.

“These are very strange people”. They were irrational and when they became violent that was a problem, Dr Martin said, adding religious people should be concerned that some of the protesters were using religion as an excuse.

Dr Martin said people had become frustrated and there was a danger that if normal human interactions were blocked that could create mental health issues. “There has to be light at the end of the tunnel.”

“We need to create a senses of solidarity, it is there, but people are frustrated. We need ways of injecting hope, and that’s where religious groups come in.”

While he understood that restrictions on gatherings were required when there were spikes, Ireland was the only country with a blanket ban on public worship, Dr Martin said. It was important for the well-being and spiritual health of people to know there was an exit strategy to allow a return to worship, he said.

According to Dr Martin, online services were a temporary measure but he said the church had to embrace people with different levels of religious adherence, adding it would be necessary to move away from institutionalised methods to a personalised sense of religious values and to develop those.

“It will be a different church when we come out of Covid.”