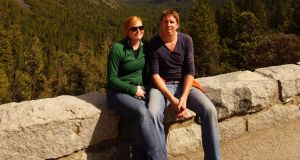 Caitlin Vennard and Cormac McGrady at Yosemite National Park in California in 2012. The Co Down man was deported from the US in 2013.

A Co Down man who was deported from the US in 2013 says he does not have much advice for Cork native Keith Byrne because the country’s immigration system is “ruthless.”

Cormac McGrady (45), who was sent home after being arrested for a public nudity offence while skinny-dipping with his wife on holiday in Delaware, says he cannot offer encouragement to others given his experience during his deportation.

Mr McGrady, who now lives in Newcastle, Co Down, was applying for his green card as the husband of US citizen Caitlin Vennard when his arrest, six years ago, started a chain of events that led to detention in a Pennsylvania detention centre for three months and being walked handcuffed onto a flight out of the US.

The Northern Irish man said that given his experience he would be “very surprised” if Mr Byrne (37), who was arrested in Philadelphia last week for overstaying a short-term visa waiver, was allowed to remain in the country.

The Cork father of three, who is married to a US citizen, signed an application for an Irish passport on Friday, which could pave the way for his deportation, though his lawyers are exploring further avenues to halt his deportation.

“If it ends up that he is deported, he needs to take it on the chin, get moving quickly and get over here and get your life moving again, as quickly again. I didn’t want to waste my time,” said Mr McGrady.

“We are sort of at the stage where it has been six years to the day and really happily it is very much to the back of my mind.”

Ms Vennard said that the couple, who lived in Arlington, Virginia and worked in an Irish pub in Washington DC at the time of his arrest in 2013, filed a “stay of removal” to halt the deportation but it just delayed the process.

“That’s what took three months. I don’t know if it would have went any quicker if we hadn’t applied for it. It wasn’t a sentence. He wasn’t charged with any crime. That was the amount of time for the paperwork to go through in 2013. It was the usual bureaucratic silliness,” she said.

Ms Vennard recalls the sense of helplessness during the deportation process and being “left with our hands tied” because an individual waives their rights if they overstay an ESTA visa waiver.

Like Mr Byrne, Mr McGrady travelled to the US on a 90-day tourist visa waiver. The Co Down man, who works as a tiler in Newcastle, encountered a delay in the processing of his US green card after marrying Ms Vennard in late 2012 due to his arrest over a minor incident during a holiday to New York city in 2001.

He was arrested for buying a homeless man beer and the arrest record was required for his green card application but there was a delay in finding it. Both of his US public order offences were later expunged.

Mr Byrne’s applications for a green card were refused due to previous minor offences for marijuana possession.

Mr McGrady served time in two detention facilities in Delaware and one in Pennsylvania. He was banned from re-entering the US for 10 years.

“It was the toughest experience I ever went through. I am sitting here, six years later, going I feel nearly better for it, I don’t think there is anything in life that could shake me after this,” he said.

Mr Byrne should have no reason to be scared, he said, because he was being detained with others who were “in a similar boat” and facing deportation. He described it as a frightening experience.

“Your whole life is ripped from under you. How do you tell someone that their whole life [IN THE US]is going to be taken away?” he said.