An audit will value memorabilia relating to Beckett, Swift, Bram Stoker and many others 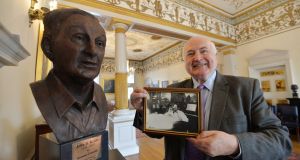 In the early 1980s an American tourist unable to find anything in Dublin celebrating Ireland’s fabled writers set out his disappointment in a letter to the tourist board.

The note, written on neat blue paper, found its way across the desk of Matt McNulty, head of the now defunct Bord Fáilte, who immediately spotted an opportunity. Already considering the potential of special-interest tourism, Mr McNulty, now 74, would go on to develop the Dublin Writers Museum, eventually opening it in 1991.

“We thought this person was right,” he recalled. “We should be doing more on our writers.”

In the intervening years, the Parnell Square building would assemble an impressive array of early-edition books and memorabilia, the value of which would remain largely unknown outside a few educated guesses and a now outdated early audit.

That is about to change. Fáilte Ireland has begun searching for an expert to pore over today’s collection, as well as an extensive catalogue of paintings, with a view to putting a price on one of the country’s most extensive artistic treasure troves. There are up to 5,000 individual pieces to consider.

“We wanted to explain what the writers were like as people; what Dublin city was like when they grew up,” said Mr McNulty. The decision to press ahead with the museum sparked a search for writers’ relatives and possessions that would help tell their stories.

“We spread the word out there: we are renovating this building, we need content.”

The trawl was a success – today’s attractions include Samuel Beckett’s telephone, with its conspicuous red “do not disturb” button to guard against intrusions; Patrick Kavanagh’s death mask and typewriter; and a first edition of Bram Stoker’s Dracula, published in 1897 by Archibald Constable and Company.

Glass cases, surrounded by busts and portraits, house Brendan Behan’s press card; a hastily autographed note from George Bernard Shaw; an 1804 edition of Gulliver’s Travels by Jonathan Swift; and a lengthy 1920 handwritten letter from the pen of WB Yeats.

It is a difficult assembly to catalogue and value, but this month Fáilte Ireland has invited would-be experts to come and see the treasures for themselves. As well as what’s on display, there are boxes of unseen material, much of it donated from families, tucked away in the upper reaches of the museum.

The majority of the inventory, it says, consists of “an extensive collection of books, including a number of first editions and other high-value pieces, written by or relating to Irish writers” as well as a large amount of paintings and sculptures.

Work stored at another site includes about 300 pieces from the WB Yeats Thoor Ballylee collection and paintings by Patrick Scott, Louis le Brocquy and Gerard Dillon, among others.

“I think [Fáilte Ireland] just want to know what’s there,” said Mr McNulty. who has seen the fruits of his vision almost three decades later.

“They want to find out because there is a huge interest in heritage and maybe there is stuff there that’s not on display that should be.