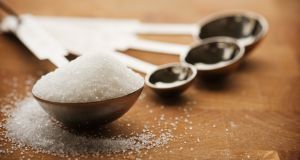 Revenue says the sugary drinks tax raised €15.8 million in the first half of 2019. This puts a projected year yield at €31.6 million compared to the €35 million expected.

A tax on sugary drinks is expected to raise less revenue than anticipated for the second year in a row despite measures introduced earlier this year to extend the tax to milk drinks, official figures have indicated.

Revenue said the tax has raised €15.8 million for the first half of this year. This puts a projected 2019 yield at €31.6 million compared to the €35 million expected by the Government. Last year, the tax pulled in just €16.5 million against a projection of €30 million. The Government said the tax could yield up to €40 million in a full year.

Popular drinks including Sprite, Lucozade and Ribena had their sugar content reduced by up to 60 per cent in a bid to avoid the tax and appeal to customers who wanted to reduce their sugar intake. Many producers replaced the sugar with artificial sweeteners, but some customers were put off by the change in taste. The UK also introduced a sugar tax last year.

Earlier this year, an amendment to the 2018 Finance Bill came into effect which extended the sugar tax to milk and plant-protein drinks. This included yogurt and blended coffee drinks, which had been originally exempt because they were seen as having nutritional benefits from calcium and protein. Since January 1st they have been taxed if they had a sugar content of 5g or more per 100ml and did not have a calcium content of least 119mg per 100ml.

A leading drink company argued in its government submission on the sugar tax proposal that it was unfair to exempt milk drinks because they often had more sugar than fizzy drinks. Britvic Ireland said this sent an “inconsistent message” to consumers.

A spokesman for the Irish Beverage Council said the yield was less than predicted because the soft drinks market has been constantly evolving for over 35 years. “Consumers want to manage sugar in their diet and manufacturers are listening, investing in innovative new products to match evolving tastes,” he said.

Revenue generated from the sugar tax is not ring-fenced for particular health issues, such as reducing obesity.

A spokeswoman for the Department of Finance said the evidence to date suggested that the soft drinks industry has responded to meet the policy objectives of the sugar tax with products having been reformulated to reduce their sugar content. “This most likely accounts for the yield being lower than originally forecast,” she added.