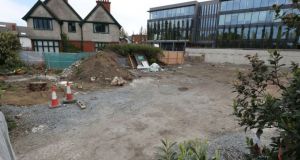 No 40, Herbert Park, in Dublin 4, was the home of Michael Joseph O’Rahilly, known as The O’Rahilly, the only leader of the 1916 Rising to die in battle. Photograph: Nick Bradshaw

An Bord Pleanála has approved the demolition of 40 Herbert Park, Ballsbridge, the former home of The O’Rahilly, the only leader to have been killed fighting during the 1916 Rising.

The planning authority approved the demolition of the house to make way for an apartment and hotel development of up to 12 storeys on adjoining sites number 36, 38 and 40 Herbert Park.

Numbers 36 and 38 have already been demolished but several houses of similar vintage and style at numbers 1-34 Herbert Park are included on Dublin City Council’s Record of Protected Structures.

Derryroe Ltd, a development company owned by the McSharry and Kennedy families, who also own the Herbert Park Hotel, had applied to to the board under the Strategic Housing Initiative, for the aparthotel extension and 105 apartments fronting on to Herbert Park.

The approval comes despite opposition from several residents’ associations and heritage organisations, city councillors and the Department of Culture and Heritage.

Opposing the development An Taisce told the planning board the house has historic and social significance due to the historic association with Michael Joseph O’Rahilly who died in the 1916 Rising.

In addition, An Taisce said the house is “an attractive Edwardian villa type design that is largely unaltered and characteristic of the development of the inner suburbs in the late 19th and early 20th century”. The heritage body said “given the historic association and the age and design the house would almost certainly fulfil the requirements for addition to the RPS”.

It also said the City Development Plan encouraged the retention of older buildings of significance which are not protected in order to conserve the built heritage of the city.

Councillors of all parties objected to the development, both in relation to its height and the demolition of number 40, which the council’s conservation section was assessing for listing on the Record of Protected Structures (RPS).

Submissions opposing the demolition of number 40 were also made by the 1916 Relatives Alliance and Relatives of the Signatories of the 1916 Proclamation. The O’Rahilly’s grandson, Proinsias Ó Rathaille, also lodged an objection with the board, and has raised concerns about the deterioration of the house, which has had its windows smashed.