If Ryanair pulls out, what will happen to Cork Airport? 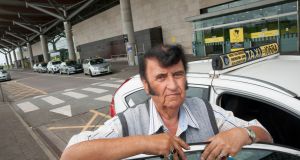 Taxi driver Derry Coughlan has carried passengers to and from Cork Airport since 1975. He has endured recessions and storms but he now fears for the future having never seen things as bad as during the Covid-19 pandemic.

“We went through Storm Ophelia and the snowstorms of recent years. We tipped away, there was still movement,” he says.

“This is the worst ever, I’ve never seen it so quiet. It’s at a total standstill. The people are only travelling out of bare necessity for births, deaths and marriages.”

The problems facing the airport increased last week after Ryanair warned it would pull its services from Cork for the winter if the Government does not relax quarantine rules for those travelling in and out of the State.

“Back in the good days, you would have 200-300 taxis rotating at the airport, now you have only three or four,” Coughlan says.

“We’re only turning up when there are planes and we’re chancing our luck. Yesterday there were only three flights. Today there are nine. If Ryanair pulls out, it’s going to be a total collapse.”

In a memo sent to all Ryanair crew in Cork and Shannon Airport, the airline’s chief executive Eddie Wilson said that Government “mismanagement” of travel during the pandemic had exacerbated the damage to its operations. He said future bookings at both airports had suffered “irreparable harm”.

Pleas to add EU countries with lower Covid-19 figures to the State’s safe-travel list have not been acted on. This has left Ryanair facing into a winter at Cork and Shannon with no outbound business travel and reduced inbound leisure travel unless restrictions are relaxed by the Government this week.

Minister for Transport Eamon Ryan has said there are “real benefits” to a colour-coded EU proposal for travel in the bloc which favours Covid-19 testing over imposing a quarantine period on people arriving in the country.

Failure to ease the rules are expected to lead to all Cork- and Shannon-based Ryanair crew being put on unpaid leave from October 31st.

“We will do our best to reopen these bases from March next year if, but only if, these failed travel restrictions to other EU states have been lifted in time,” Wilson said in his memo.

Ryanair’s importance to Cork Airport is starkly explained by Kevin Cullinane, who handles the airport’s communications. Last year, it carried 44 per cent of all passengers who used the airport – the largest share it has ever accounted for.

The airport’s dependence on the airline has grown further this year, with Ryanair adding a Cork-Katowice service to its schedule, bringing to 24 the number of routes it offers from the city.

The airline now accounts for 81 per cent of traffic at the airport which, before Covid-19 struck, was Ireland’s fastest growing. Last year it dealt with 2.6 million passengers and Ryanair carried 1.14 million of these. The aim this year was to serve 2.8 million passengers but Cork will be lucky if it breaks the 600,000 mark, says Cullinane. He would have expected 300,000 passengers in August but “we had 40,000, down 86 per cent”.

Signs of this decline in traffic are everywhere. Airport shops and restaurants are closed, save for those in the departure lounge. Bank of Ireland has shut its airport branch and just 250 of its 4,000 car park spaces are being used.

Cork Airport is owned and run by DAA. Currently it employs 250 people, though staff have the option of taking a career break, working reduced hours or taking redundancy. Up to 40 posts are expected to go.

If Ryanair withdraws next month, airport handling agents Swissport, which would normally employ 170 people in Cork during the summer, will be badly affected. Today, Swissport employs 36 and this could fall to eight if Ryanair departs.

Cullinane would not be drawn on Ryanair’s case, though he concedes that Cork Airport is at a critical juncture as airlines attempt to plan their schedules for next summer.

“At this stage they are crying out for clarity from the Government,” he says. “Airlines are urging the Government to map out a clear path in relation to air travel to and from Ireland. The green list is very limited and they are looking for a change in that regime and whether the blanket 14-day quarantine remains in place.”

Cork Airport and Munster’s economic health are inextricably linked according to a study by aviation consultants InterVistas, which last year estimated that it supports 12,000 jobs (directly or indirectly) and contributes €904 million a year to the local economy.

“Without viable passenger numbers, airlines will continue to make cold decisions with an impact that will last for years to come,” says Cork Chamber of Commerce chief executive Conor Healy, who wants common EU-wide travel rules to be introduced.

“Once a route or airline is gone, there is little short-term prospect of its return.”