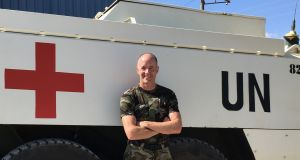 Former Army Ranger Wing commander Cathal Berry TD has said it is “scandalous” that TDs get a “golden handshake” if they resign their seats but a soldier seeking early discharge is handed a bill for hundreds of euro.

He also said the Government’s failure to honour an agreement in July last year on “technical pay” to increase military allowances for Defence Forces personnel had resulted in “a haemorrhaging of paramedics, mechanics and technically qualified personnel”.

The Kildare South TD said the Government was taking issue with the UK government because it did not want to honour a Brexit agreement it freely entered into, but the coalition was yet to honour the commitment made to Defence Forces members 14 months ago in good faith.

The deal, worth €10 million, includes a 10 per cent increase in military allowances for all personnel offered as part of an ongoing row over pay and conditions and staff retention.

Dr Berry also suggested that the Reserve Defence Forces, currently at 1,000 personnel, could quickly return to close to its 4,000 target with a simple amendment to legislation currently before the Dáil. The Defence (Amendment) Bill, which Minister for Defence Simon Coveney has described as “housekeeping” legislation, will allow former personnel to rejoin the permanent Defence Forces. Dr Berry said the Bill could be amended to allow them to re-enlist into the Reserve also.

“There should be a seamless transition for people like myself who have recently retired from the Permanent Defence Force if they are interested in serving in the Reserve Defence Force.”

There would be a “great impact within 24 hours” if this happened and if Reserve personnel were allowed to serve overseas in niche operational role such as medicines and communications, if they were permitted to train overseas and could participate in ceremonial events abroad.

The Independent TD and medical doctor said having to buy their discharge was a “real bone of contention” for soldiers. Dr Berry, who spoke in a Dáil debate on the legislation, said “private soldiers and TDs have one real thing in common: they both sign up for a five-year term.

“If I resign my seat voluntarily now and walk out of here, I will receive a golden handshake. If private soldiers do not complete their full five-year term, they are handed a bill for €300, which is completely scandalous. This can be very easily changed and would have a huge impact on morale.”

A few “minor adjustments” to the legislation to remove that sanction and provide for Reserve Defence Forces personnel could “have significant and disproportionately positive effects downstream”.

1 ‘Insane’ gathering of hundreds of students in Galway condemned
2 Prepare for six to nine months of Covid-19 restraints, warn health officials
3 Irish, German and Italian contact-tracing apps to be linked in bid for ‘safer’ travel
4 Speed and distance of Covid-19 droplets tracked by Mater researchers
5 Man unidentified in psychiatric hospital for 30 years may have DNA taken
Real news has value SUBSCRIBE