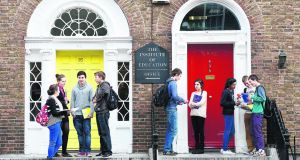 The Institute of Education, based on Dublin’s Leeson Street, has written to the Government asking it to broaden the grounds for appeal for this year’s Leaving Cert pupils. Photograph: Alan Betson/The Irish Times

The country’s biggest grind school says “serious flaws” in the calculated grades process for Leaving Cert students led to almost half of its teachers’ estimated grades being lowered.

The Institute of Education, based on Dublin’s Leeson Street, has written to the Government asking it to broaden the grounds for appeal for this year’s Leaving Cert pupils.

The institute, which says it had the largest number of Leaving Cert pupils in the country – more than 800 – hired expert data analysis firm Krisolis to assess the methodology used by the Department of Education in awarding grades to students.

It claims the analysis found “serious flaws” in the model used by the department which produced a “bias” against large class sizes.

Overall, it says, 96 per cent of its students had a grade reduced and 44 per cent of all its teachers’ estimated grades were lowered. This compared to a national average of 17 per cent of teachers’ grades which were reduced.

It says this resulted in an average 30-point drop on what students would have achieved based on their teachers’ estimates; in some cases, there was a drop of 77 points.

Minister for Education Norma Foley, however, has said the calculated grades process used by the department was “blind” to school types and was applied fairly to all students.

A detailed technical report released by her department shows that teachers in some instances overestimated the proportion of students who would secure top grades by a factor of two or three times the expected level.

One in six grades ended up being lowered under the department’s standardisation process, though overall grades nationally were the highest on record.

However, Institute of Education principal Yvonne O’Toolesaid the analysis identified “fundamental bias” in the methodology used to assign calculated grades to students.

She said staff members at the institute and a team of professional data analysts have spent the days since the calculated grades were released on Monday assessing the methodology used by the department.

Ms O’Toole said the level of reduction, along with a national grade inflation of 4.4 per cent, will result in “hundreds of our students missing out unfairly on their chosen careers tomorrow when the CAO offers are made . . . Our student body has been significantly penalised by the calculated grades process.

“As a school, we have written to the Taoiseach and his relevant Ministers today asking them for an appeals system that allows the calculated grades given to be challenged. The current appeals process is meaningless, only allowing a student to appeal a clerical error, not their grades.”

The institute’s criticism follows calls for an investigation into how Leaving Cert results were calculated St Kilian’s Deutsche Schule in Clonskeagh, Dublin.

The private school which specialises in the teaching of German expected half of its students to secure a H1 in German based on past performance. However, just 14 per cent secured this grade under the calculated grades process.

In a letter to the department, school principal Alice Lynch expressed the school’s “deep concern” at the “very flawed process” applied to the calculation of grades in German at higher level for the school.

Ms O’Toole, meanwhile, said that pending the outcome of appeals, students should not lose out on CAO places.

“We are asking that our pupils and others impacted by the flaws in the calculated grades model are treated respectfully,” she said.

“They should not be penalised tomorrow in the CAO process because no redress system is in place to take account of the flaws in the State methodology. To do anything less than putting a redress system in place would be robbing these young people of the opportunities for which they have worked so hard.”

She said it was the first time the calculated grades model has ever been used in Ireland.

“It has never been tested because there is no historical data to test against. There was always going to be anomalies but not to have recourse to appeal when flaws have been discovered would be a travesty,” she said.

The institute maintains that the department’s model of bringing larger cohorts closer to the national norm “exacerbated the negative impact” on its students.

It maintains that no adjustment was made to the model used by the department to take this into account, which produced a “bias” against larger cohorts within the process.