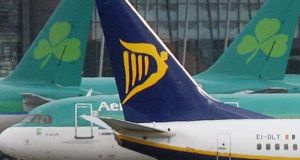 Passengers travelling to and from Dublin airport will encounter long delays on Saturday after an earlier radar issue caused the suspension of all services for over an hour.

That suspension has now lifted and flights have resumed after an issue with the Irish Aviation Authority’s radar system was resolved.

“There will be a knock on impact to the flight schedule as a result of the disruption this morning.

According to several reports, flights from/to Dublin Airport (DUB) are currently affected by a radar issue; no departures at the moment, some arriving flights are holding https://t.co/aCnCkKodhL pic.twitter.com/VwxkrHlg3Q

“Passengers are advised to check with their airline for the latest information regarding their flight.”

Data from flight-tracking website Flight Radar 24 showed arriving flights holding off landing, while flights due to take off were standing still on the runway.

Flight Radar data also showed a number of flights appeared to have diverted to Shannon airport.

The Irish Aviation Authority also released a statement, confirming the “outage which resulted in an interruption to service at Dublin airport from 8.20am till 9.35 am this morning has been resolved”.

“The cause of the issue was identified by the IAA and a full air traffic control service has been restored.

“The IAA is satisfied that the resulting backlog will be cleared today and passengers are advised to check with their airline for details of departures and arrivals.

“The IAA regrets any disruption to flights at Dublin airport. Decisions to restrict operations are taken solely to assure the safety of the travelling public and flight crew.”