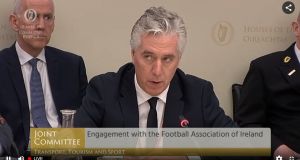 The FAI has said it is taking urgent steps to address its governance and financial issues while the future of its former chief executive John Delaney remains in doubt.

In a statement released on Sunday evening, the FAI board said it would meet again on Monday to review its response to the controversy that began with the revelation last month that Mr Delaney gave the association a €100,000 loan in 2017 to prevent it exceeding a €1.5 million bank overdraft. This loan was subsequently repaid.

Mr Delaney has insisted he acted in the best interests of the game when he loaned the money to remedy a short-term cash flow problem.

The association said it planned a root-and-branch review of its rules and processes. It also said it was engaging with Sport Ireland on the composition of a new governance committee with additional independent members.

The statement added: “The association continues to work to restore the trust of its stakeholders including the Minister and Sport Ireland as soon as possible. The FAI wants to ensure that all those who play football across Ireland do not suffer as a result of the actions of the association.”

The association also said it would respond to questions raised by the Oireachtas committee for sport by close of business on Monday.

Mr Delaney, who took up the role of executive vice-president with the FAI last month after stepping down as chief executive, was not mentioned in the statement.

Further pressure was placed on Mr Delaney by news reports about his expenses on Sunday.

Minister for Sport Shane Ross said he had “ongoing concerns relating to corporate governance at the FAI and the circumstances surrounding a financial transaction”.

Fine Gael TD Fergus O’Dowd, who chairs the Oireachtas committee on transport, tourism and sport said he was “deeply concerned” about reports in relation to Mr Delaney’s expenses.

“I want to see a forensic audit of all of the accounting activities of the FAI and I believe the Minister and Sport Ireland should insist on that,” he said.

John O’Regan, secretary of the Kerry District League told The Irish Times, Mr Delaney had texted him on Saturday to say he would be stepping down from the FAI board, but would continue his role with Uefa.

The organisation has hired financial firm Grant Thornton to investigate how the loan came about, despite three members of the board knowing about the loan when it was paid.

The controversial €100,000 payment, which has raised questions about the FAI’s governance arrangements, was not flagged to Sport Ireland, the State body that oversees the public funding of sporting organisations in the country.

On Thursday, The Professional Footballers Association Ireland called for a complete overhaul of the organisation after reviewing the board’s behaviour in the Irish parliament.

A statement from the Management Committee of the PFAI condemned the board as “rotten”.

On Sunday, the Sunday Times reported on details of Mr Delaney’s spending on his work credit card in the last six months of 2016, while he was on a salary of €360,000 as chief executive.

There are also reports that other FAI board members are also set to step aside from their posts over the coming weeks.

Cathal Dervan, the FAI director of communications said there was no board meeting at headquarters at Abbotstown on Saturday.

The ongoing controversy led to protests at a number of League of Ireland matches on Friday night.

Well-placed sources said several members of the FAI board are now wavering in their support of Mr Delaney.

There are, however, significant concerns that if Mr Delaney was to leave his post, Ireland’s influence at Uefa, the European governing body for soccer, could also be diminished at a time when the association is pursuing a joint bid for the 2030 World Cup alongside the English, Welsh and Scottish football associations.

Mr Delaney is a member of Uefa’s executive until 2021, having been elected in 2017. The terms of his departure from the FAI would also have to be addressed.

Taoiseach Leo Varadkar said on Friday questions “need to be answered” by the FAI and Mr Delaney over the €100,000 loan.

Speaking after a week in which Mr Delaney refused to answer questions at an Oireachtas committee about the loan citing legal advice, Mr Varadkar said: “I don’t think anyone would be satisfied by it”.

“The public, taxpayers, football fans would have like those questions to be answered.”

Mr Varadkar added Mr Delaney had been under no obligation to answer questions at the Oireachtas committee.

“The truth is that he was within his legal rights not to answer those questions. He is not a public servant and therefore is not accountable to the Oireachtas,” he said.

Elsewhere, sources said that they doubted sponsors would abandon the FAI immediately, despite several issuing statements on the controversy this week. One source close to a current FAI sponsor said it was likely brands would adopt a “wait and see” attitude, adding that it was “not the role of a sponsor to decide what the next part of the process should be”.