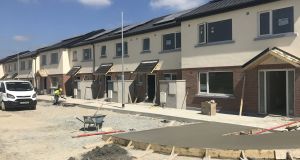 Under the Rebuilding Ireland programme the large housing associations are expected to build up to 15,000 houses by 2021.

The Irish Council for Social Housing has warned that the decision to reclassify large housing associations as bodies controlled by the Government could threaten their ability to borrow money to build thousands of rental homes .

Sixteen housing bodies, including Respond and Tuath, were on Wednesday told by the Central Statistics Office that they are not sufficiently free of Government control and influence to be regarded as independent agencies.

The chief executive of the Irish Council for Social Housing (ICSH) Dr Donal McManus said the implications of the CSO’s recommendation to Eurostat will be significant for housing associations.

Under the Rebuilding Ireland programme, the large housing associations – known as Tier 3 bodies and each controlling more than 300 houses – are expected to build up to 15,000 houses by 2021.

The CSO felt that the housing bodies have independent governance structures, but they fell down on “finance and control”, Mr McManus said.

The housing bodies expect to deliver at least 4,500 new social homes over the next two years. “If there is not urgent examination of the CSO reclassification decision, this vital social housing pipeline will be put in jeopardy,” he said.

The decision will limit their ability to fund construction through borrowings from banks or credit unions and creates “significant uncertainty and delays for building programmes that are ongoing”.

The CSO’s decision “appears to be based on a number of assumptions of control and financing issues that doesn’t accurately reflect the contractual relationship between housing associations and the State”.

Currently, housing associations in Ireland (also known as approved housing bodies) are classified as private non-profit controlled institutions. A reclassification decision could have a number of serious implications,” he said.

Dr McManus added: “The ICSH and the sector will be looking closely at the background to the recommendation and is calling on Government to ensure that any classification will not impede current and future new developments especially as, in the context of the housing and homelessness crisis, the sector is playing its part.”