Decision on curfew for hospitality sector in NI postponed 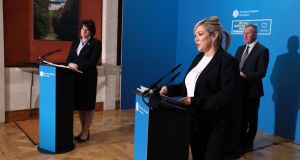 A decision on whether to impose a curfew on the hospitality industry in the North to limit the spread of coronavirus has been postponed until next week.

Speaking to reporters on Thursday evening following a meeting of the Northern Executive, the First Minister, Arlene Foster, said further discussions had taken place around the issue and the Executive “will finalise more details over the next couple of days”.

Explaining the reason for the delay, Ms Foster said there was a “strong unity of purpose in relation to the way forward” among ministers and the North’s chief medical officer and Chief Scientific Adviser, but it was “important all the issues were dealt with” before an announcement was made.

“There’s no failure to agree anything,” Deputy First Minister Michelle O’Neill, said. “We actually have an agreed way forward [and]what we want to do is make sure we have all of our i’s dotted and our t’s crossed and we want to make sure we have the regulations in place,” she said.

Asked by The Irish Times about Donegal’s move to Level 3 of the State’s five-level alert plan from midnight - which was being announced as the First and Deputy First Ministers were speaking at Stormont - Ms Foster said she had not seen the detail but they would consider it.

“We have been concerned about some of the areas along the Border, including in my own constituency of Fermanagh and South Tyrone, which of course borders onto County Donegal, ” Ms Foster said, “so we will be looking at all of that.

She said she had not spoken to Mr Wilson as she had been engaged in the Executive meeting, but said her position and that of the DUP was that “everyone is subject to the law and everybody is equal under the law, and therefore it’s very important that we listen to the laws and abide by them”.

£29m in additional money was also allocated to the arts sector as part of a £165m allocation of Covid-19 funding announced on Thursday.

It also includes £29m for a range of business support schemes, £40m to help local councils, and £14.8m for continuing upgrading work on the A6 Belfast to Derry road.

Workers in the North will also benefit from a new UK-wide job support scheme. Under the new programme, which begins on November 1st when the current “furlough” scheme ends, the UK government will help pay the wages of employees in viable jobs who are working fewer than normal hours, with the government pay capped at £697.92 per month.

The North’s Finance Minister, Conor Murphy, welcomed the introduction of the scheme, but said he still had “concerns” and would seek clarity from the UK government.

Northern Ireland has recorded a further 189 cases of coronavirus in the last 24 hours, the North’s department of health announced on Thursday. It brings the total number of positive cases to 9,950, including 1,128 identified in the last seven days.

No further coronavirus-related fatalities were reported, leaving the total number of fatalities recorded by the Department at 577.

Forty-one patients with Covid-19 are currently being treated in the North’s hospitals, and five are in intensive care.

Three members of staff who work on a stroke ward in Altnagelvin Hospital in Derry have tested positive for coronavirus, the Western Health and Social Care Trust confirmed on Thursday.

Fifteen members of staff are currently off work and self-isolating as a precautionary measure.

All 23 patients in Ward 40 have been tested, the Trust said, and there are currently no positive cases on the ward.

Ms Foster warned on Thursday that the average number of new coronavirus cases in the North was now around 150 per day, but said there was “some encouraging evidence” that the additional restrictions limiting the number of people who can gather in private homes were working.