Public may be advised to wear face coverings, says Varadkar 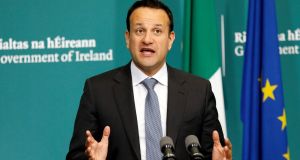 The public may be advised to wear face coverings in places where social distancing guidelines must be adhered to, Taoiseach Leo Varadkar has indicated.

Speaking on Wednesday morning, he said that the Government is considering changing its advice to the public on the issue and suggested this may be done by the end of the week.

“But there certainly is trend across the developed world to advise the public to wear face coverings in places where social distancing is difficult.”

Mr Varadkar said this may be on public transport or in an enclosed indoor space.

“But because the science is so uncertain on this, because there isn’t agreement in the scientific community on this, it is not something we’d ever make compulsory, but it’s something that we may make advisory.”

The deaths of another 59 patients diagnosed with Covid-19 were reported by the National Public Health Emergency Team (NPHET) at a briefing on Tuesday, of which 45 were laboratory-confirmed.

The deaths occurred on 10 different days in the past fortnight, though most were in the last three days. There have now been 1,159 Covid-19 related deaths in the Republic.