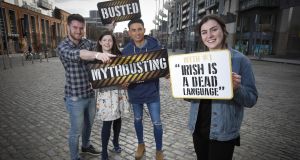 The Irish language is dead, Gaelscoileanna are elitist and Ireland would be socially conservative if we spoke Irish.

These are some of the assumptions challenged by a new campaign designed to debunk misconceptions surrounding the language.

Called Mythbusting, the campaign comprises a series of 10 videos and talks organised around the country by Colm Ó Broin, an Irish speaker and Conradh na Gaeilge member from Clondalkin.

Mr Ó Broin said he felt compelled to challenge these claims as as they arise whenever an article on the Irish language appears in the media.

The video series is being launched on Thursday to coincide with Lá na Meáin Sóisialta, a Seachtain na Gaeilge initiative encouraging the use of Irish and the use of hashtag #LNMS17 on social media.

The first myth tackled is the claim that Irish is a dead language. Mr Ó Broin says research data and census figures point to the exact opposite. “In terms of fluency, the Irish Language Survey carried out by Amárach Research in 2013 showed that almost 500,000 people across Ireland can have a conversation in Irish and another 150,000 have “native speaker fluency.”

“Even this figure would give Irish more fluent speakers than most languages in the world”.

The debate surrounding the Irish language renders the provision of bilingual education a hot topic, and while the ever-increasing demand for education through Irish continues to go unmet there are still critics who claim that such schools are elitist.

Pointing out that more than half of the primary-level Gaelscoileanna in Dublin and Belfast are situated in working-class areas, Mr Ó Broin says children from every social class in Ireland attend Irish-medium schools.

He contests the claim there is a racist motive behind the decision by parents to send their children to Irish medium schools.

“While there may be some parents who have this motivation – to stereotype all Gaelscoil parents as racists because of the actions of a few is prejudiced in itself.”

“Irish-medium education is available and welcoming to children from all backgrounds,” he adds.

For those who believe it is irrelevant in modern society and that Irish would make the country too insular, Mr Ó Broin says: “By this logic, more than 180 countries in the world would also be insular as they don’t speak English as their first language.

“Speaking Irish doesn’t mean you can’t speak English or any other language to interact with people from other countries. In fact, studies have shown that learning a second language increases tolerance.”

The next Mythbusting talk takes place on March 21st at 8pm in Gorey Library, Co Wexford. Other talks are planned for Galway on March 31st, Belfast on April 22nd and Derry on May 13th.

The following ‘alternative facts’ are addressed as part of the campaign:

1 “Irish is a dead language”

2 “Irish has taken lots of words from English”

3 “Ireland would be poor if we spoke Irish”

4 “Gaelscoileanna and other Irish-speaking schools are elitist”

5 “Ireland would be insular if we spoke Irish”

6 “Ireland would be socially conservative if we spoke Irish”

7 “The Irish language has been ‘politicised’”

9 “The pronunciation of Irish names makes no sense”

More information can be found at www.cnag.ie/mythbusting