‘It feels like we’re standing outside of ourselves looking in,’ says sister 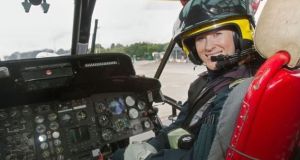 ‘You couldn’t drag her away from that helicopter over to the lifeboat station.’ Photograph: Valerie O’Sullivan

The mother of Capt Dara Fitzpatrick said they would bring up her three-year-old son Fionn as her she would have wanted. She adopted a boy almost three years ago.

She spoke about how the family kept a promise to her daughter.

“She always told us that if anything ever happened she never wanted to be left alone, so when we arrived down here last night at about 10.30pm we decided that we would do shifts. So the first lot of us left here at 12.30am, and we tried to sleep – none of us did– and we came back at 4.30am, and we’re here ever since. We kept our promise to her.”

Capt Fitzpatrick’s sister Niamh Fitzpatrick said her parents were the source of her sister’s bravery. “It’s from the two people standing here beside me, who can stand here and talk about their child. That’s where she gets it. Thirty-nine years ago yesterday my parents had a still-born baby, so on the same day 39 years apart they lost two of their six children. That’s where she gets her courage from.”

She described it as a “living nightmare”.

“It feels like we’re standing outside of ourselves looking in. And then when you go in and you see Dara, and she looks like her. Her face is beautiful, she’s not marked, we keep looking, saying she’s going to wake up and say ‘boo’.”

Her father John said he was in Cheltenham when the crash happened. “I jumped into the car and the people in England said you can dump the car and we’ll fly you back to Dublin. It was unbelievable.” He said his daughter was “beautiful”.

Capt Fitzpatrick (45) was taken from the sea in the early hours of Tuesday by the RNLI Achill lifeboat after Malin Coast Guard station issued a Mayday alert and tasked a number of units. She died in the crash which occurred when the Dublin-based Sikorsky rescue helicopter was approaching Blacksod lighthouse for refuelling.

Speaking from the mortuary in Castlebar, Co Mayo, where the family had spent the night with Capt Fitzpatrick’s remains, Niamh Fitzgerald said: “I can’t yet say ‘she was’ – she is all about family.”

She said when her sister could not get into Aer Lingus she took an alternative route after someone gave her the gift of a half-hour helicopter trip.

“She showed promise, and went on to become the first female commercial pilot in the country and the first female captain. It never occurred to Dara that she couldn’t do this because she was female. There was never any question of her gender.”

Ms Fitzpatrick said her sister had recently taken the helicopter to a school in Rathfarnham in Dublin, where she talked about her work to children.“She loved talking to children. That’s what she was about.”

Recently Capt Fitzpatrick had undergone “dunker” training, and told her family afterwards that she knew there were risks in her job, but that because of the training she and her crew were ready, and the training would kick in if something happened.

Speaking about Capt Fitzparick’s adopted son Fionn, she said: “They say it takes a village to raise a child, well he has a village around him now who will raise him on her behalf.”

Jim Griffin, who worked with Capt Fitzpatrick in Dunmore East Coast Guard, said she was greatly respected by her colleagues. “Dara was an exceptional lady, she was assertive, elegant, a very calm presence. We worked on a weekly basis. I can’t say enough about Dara.”

Speaking on Newstalk Breakfast, he said Capt Fitzpatrick embraced everything to do with water and sea safety, and was always a “sunny presence welcoming everyone with open arms”.

Mr Griffin said the emergency services were “a small community, we all know each other”.

Another former colleague, Mark McGibney of Dun Laoghaire RNLI, described her as “passionate” about her job and “proud of her team”.

“We’d say ‘come over have a cup of tea, the lads will look after that auld thing’ but she just would not leave the helicopter. She wanted to stay there, and she wanted to show it off to everybody – ‘this is my helicopter, I’m the captain here’ – and she’d be dragging children on and parents. That’s just the way she was about her job. How passionate she was about it, she wanted everybody to know about it.”

Philomena Lee among five given leave to challenge mother and baby homes report 17:48
Coronavirus: 394 new cases and no further deaths reported in the State 17:52
Louth man’s conviction for IRA membership ‘a miscarriage of justice’ 17:39
Bicycle-drawn hearse brings cycling advocate on his last journey 17:31
Covid-19 Vaccine Tracker: What's available in the Republic of Ireland and what else is coming? 16:53