Over 100,000 visitors expected to attend festivities in Dublin on Friday, organisers say 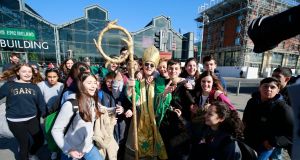 St Patrick surrounded by visiting Spanish students in Dublin in advance of the parade of Friday’s parade. Photograph: Nick Bradshaw

The luck of the Irish doesn’t always hold weather-wise on St Patrick’s Day but Dublin has been enjoying glorious spring sunshine in the run-up to this year’s holiday.

The bad news is that a cold front will cross the country on Thursday bringing a marked drop in temperatures.

Strong winds and rain will spread across the country from the west on St Patrick’s Day with rain likely to be a feature of some of the parades in the western half the country.

But in Dublin, where the largest celebration takes place, rain is not forecast until the afternoon when the parade will be over.

“It looks pretty safe at the moment,” said Met Éireann forecaster Harm Luijkx, but temperatures will be an unappealing 9 to 13 degrees across the country.

The Dublin parade will begin as usual from Parnell Square at midday. It will proceed down the east side of O’Connell Street – the Clerys side – as opposed to its usual route down the west side on account of the Luas works.

The parade is the highlight of the four-day St Patrick’s Festival in the city which begins on Thursday with an outdoor céilí at Earlsfort Terrace.

The organisers expect to surpass the estimated 106,000 visitors who came to Dublin for St Patrick’s Day last year as the holiday falls on a Friday. Another pull factor will be the thousands of England fans arriving for the RBS Six Nations match in the Aviva Stadium on Saturday.

Abroad, Tourism Ireland’s annual global greening initiative has been so successful that it has gone from some of the world’ s most famous landmarks such as the Eiffel Towers and the Sydney Opera House to more left field installations.

These include two rhino statues in Nairobi National Park in Kenya and the Futalognkosaurus dinosaur cast skeleton in the Royal Ontario Museum in Toronto.

Meanwhile, researchers at the University of Kansas have been examining the storied claim that St Patrick drove the snakes out of Ireland. They have found the snakes were long gone before St Patrick ever set foot in Ireland.

The university’s Biodiversity Institute has concluded that if there were any snakes in Ireland they died out during the last Ice Age 19,000 years ago when Ireland was essentially an arctic wasteland. When the glaciers melted, the Irish Sea formed an insuperable barrier for any snakes to arrive or thrive in Ireland.

Neither is Ireland unique in having no snakes. Other peripheral island nations including Greenland, Iceland, New Zealand and Hawaii have no snakes either.

However, the researchers at the division of herpetology believe there is a possibility that snakes could some day be reintroduced into Ireland because of climate change or if somebody releases pet snakes into the wild.

1 Irish tourists excluded from visiting Greece as country begins its tourism season
2 Quarantine will cease within fortnight, Ryanair CEO claims
3 Making sense of conflicting data around Covid-19 deaths
4 Nineteen-year-old killed as protests flare up after death of George Floyd
5 Testing of Covid-19 tracing app to begin but no date for launch
Real news has value SUBSCRIBE