One of Government’s key transport programmes now has a projected cost of over €2.6bn 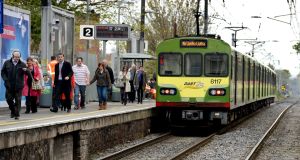 One of the Government’s key transport projects – the upgrading and electrification of the main commuter rail lines into Dublin – is set to cost at least €600 million more than projected, new figures suggest.

The Dart expansion programme, which involves the provision of electrified rail services from Drogheda, Maynooth and Celbridge to Dublin city centre as well as upgraded signalling systems and junctions, was allocated €2 billion under the National Development Plan to run between 2018 and 2027.

However, new cost estimates drawn up within Irish Rail suggest the overall bill for the project could be more than €2.6 billion.

There are also risks that the cost could rise higher with concerns that relocating the existing Docklands rail station to Spencer Dock, which is under consideration by the National Transport Authority, could add at least €100 million to the final bill.

The cost of expanding the frequency of rail services between Bray and Greystones under the Dart expansion plan could also be significant, given the infrastructural requirements involved.

The Dart expansion programme is still largely at the planning and design stage but the projected costs have risen by more than €200 million since last summer.

It is understood the projected cost was estimated at €2.38 billion last May.

However, the purchase of an additional 41 rail carriages announced several months ago by Minister for Transport Shane Ross is expected to cost about €49 million more than originally anticipated.

Estimates for the cost of inflation during the project have also been increased in the new projections.

Last July the board of CIÉ, the overall State-owned transport group, told Mr Ross that “the amount of money earmarked for public transport initiatives in the National Development Plan may not be sufficient to fund the full scope of work envisaged on those projects”.

The amount of the overrun has only emerged now.

A spokesman for CIÉ said: “Detailed design is being undertaken to inform the full delivery programme for Dart expansion.

“However, the National Development Plan does provide for a mid-term review, and we will be liaising with the National Transport Authority to advise any Exchequer process of evaluation of options for additional funding at that time.”

The expansion programme does not include the long-planned tunnel underneath Dublin city to connect the northern line at East Wall to the Kildare line at Inchicore, which has effectively been put on ice.