HSE warns against ‘prejudice’ of associating coronavirus with Chinese people

Dr Li Wenliang, who first warned about the virus, is among latest victims 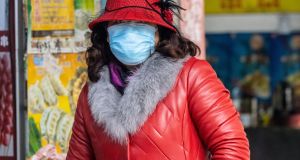 Coronavirus is not a “Chinese disease” and should not be used as such to label people from China, HSE assistant national director Dr Kevin Kelleher has said.

At a briefing in Dublin on Thursday on the HSE’s response to the global threat, Dr Kelleher stressed the virus – which originated in the city of Wuhan– did not affect only Chinese people.

It follows comments on RTÉ’s Liveline programme by a Chinese restaurant owner in Dublin who said his business was “going down deeply” since the virus scare started.

A Dublin Chinese restaurant owner added: “Our business is dead since that article came out.”

The latest high-profile victim was Dr Li Wenliang, who first warned about the virus on December 30th.

The Wuhan Central Hospital said on its social media account that the 34-year-old ophthalmologist, was “unfortunately infected during the fight against the pneumonia epidemic of the new coronavirus infection”.

“We deeply regret and mourn this,” it added.

Mr Li was reprimanded by local police for “spreading rumours” about the illness in late December, according to news reports.

The World Health Organisation tweeted: “We are deeply saddened by the passing of Dr Li Wenliang. We all need to celebrate work that he did” on the virus.

The coronavirus has now killed more than 560 people and infected 28,000 in China.

The other 191 confirmed cases have been found outside China and there has been one fatality.

Speaking at the latest HSE briefing for the flu season on Thursday, Dr Kelleher criticised the way the virus was being presented in some parts of the media.

“There is no rationale for that whatsoever for what is being talked about in some media channels,” he said.

“This is not a Chinese disease. It is very inappropriate to use that in a derogatory way. It is about people who have returned from China.

“It causes great difficulties and it has the potential to make people not come forward as a consequence if that degree of prejudice exists.”

Dr Kelleher said there are still no reported cases in Ireland and he remained hopeful that the disease could b emostly confined to China.

There were 15 suspected cases of the virus tested here as of last Monday.

Some 3,000 medical professionals, including GPs and public health doctors are being given protection packs as a precaution against the disease.

Speaking at the HSE briefing, the director of the UCD National Virus Reference Laboratory Dr Cillian de Gascun said the current mortality rate from novel coronavirus is 2-2.5 per cent.

This was significantly higher than seasonal influenza, but not as high as Sars at 10 per cent or Mers at 35 per cent, he said.

Dr Kelleher said: “We are being strong in our message that people who have returned from China in the last 14 days need to be very aware of it and particularly if they get the symptoms of shortness of breath and coughs.”

He said anybody who suspects they have novel coronavirus should report to a doctor first and not go to an emergency department.

He also stated that, while the disease was infectious, the level of transmission from person to person was low compared with diseases such as Ebola and that isolation rooms had been identified in all the major hospitals.

“We have procedures in place to make sure our hospitals can deal with this issue. You don’t need a very high degree of isolation. We are making every effort to make that happen.”