Cyclists could be sidelined in proposals for bus corridors, campaign group says 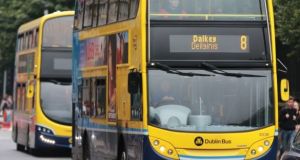 The campaign group has said cyclists could be sidelined “just like on the Luas Cross City project”. However, the group said the biggest risk for the cycling community is that the corridors are “never delivered”.

“If there is not the political will then we will fail to see any of the proposed benefits. Without the core bus corridors many of these main cycle routes will see no improvements for the next 10-plus years,” it said.

BusConnects aims to overhaul the current bus system in the Dublin region by redesigning the network and building 16 core bus corridors and segregated lanes into the city.

Details of the first four proposed corridors were published by the NTA in November from Clongriffin, Swords, Blanchardstown and Lucan to the city centre.

In its response and submissions Dublin Cycling Campaign said the proposals put forward by the NTA in relation to the four corridors have been “mixed”.

“This includes using compulsory purchase powers to achieve the space needed for segregated cycle tracks – a huge win. At many junctions new pedestrian crossings are added. Road space has been reallocated from motor traffic to cyclists,” it said.

The campaign group said the Blanchardstown corridor is “good in places and not in others” while the Lucan corridor “needs to be redesigned”.

It also said “despite the promises”, BusConnects could “treat cycling as an afterthought”.

“Cyclists could be sidelined, just like on the Luas Cross City project. The clarity of what the NTA are proposing at this early stage, leaves many questions unanswered and there is still the potential for some of the poor-quality cycling infrastructure that we have seen in the past,” it added.

The NTA said the proposals are “concept designs” in order to get initial feedback on the “overall routes” and “general arrangements”.

“At this stage of a project, it is normal that much of the detailed information remains to be developed,” a spokeswoman said.

“Following the consultation process, these concept designs will be progressed to a much higher level of detail in the subsequent project stages.

“In particular, junction layouts will require much more design work before they are finalised, and arrangements for safe pedestrian and cyclist movements through these junctions will require careful consideration as part of that process.”

The NTA said there will be a further consultation process when the designs become “more developed and complete”.

The authority has also said it will meet with a cycling organisation following the completion of public consultation.

Details in relation to the 12 other corridors are due to published from mid-January and mid-February. These include Liffey Valley, Greenhills, Kimmage, Rathfarnham, Ballymun, Bray, UCD Ballsbridge and Ringsend to the city centre as well as Clondalkin to Drimnagh, Tallaght to Terenure, Finglas to Phibsborough and Blackrock to Merrion.