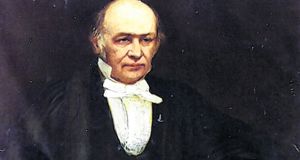 William Rowan Hamilton: In his winning essay, Hayes focuses on the ‘flash of genius’ Hamilton experienced in October 1843 when he carved the equation that had just come to his mind into the stones of Broombridge on the Royal Canal near Cabra, in Dublin

Hayes, who is from Knockcroghery, Co Roscommon, “deftly weaves in references to graffiti artist Banksy, Alice in Wonderland, the Angolan basketball team, an 1813 mental arithmetic contest of eight-year-old prodigies and the early days of Nasa’s space exploration programme,” according to the judges. He receives a prize of €2,000.

He is the youngest winner of the award that commemorates the legacy of science journalist and author Mary Mulvihill; he is also the first male winner and the first winner to come from a college outside of Dublin.

Now in its fourth year, this year’s competition invited entries on “Our scientific heritage”, notably explored places, artefacts, personalities, and issues such as public awareness or conservation.

Hayes focuses on the “flash of genius” Hamilton experienced in October 1843 when he carved the equation that had just come to his mind into the stones of Broombridge on the Royal Canal near Cabra, in Dublin – designated as “the birthplace of modern algebra”.

Hamilton had been struggling with complex numbers in three dimensions, which could not be multiplied or divided. He realised he had to use four dimensions; hence the name, quaternions. Hayes writes: “Hamilton’s carvings represent the basic rules of multiplication for these quadruples. It was a discovery that sent reverberations throughout the mathematical world and whose implications and application survive to this day.”

TCD student Aoife Kearins, who is also studying maths, was the highly commended entry and recipient of €500 for her illustrated biographical essay on Gabriel Stokes, who was Lucasian professor of mathematics at the University of Cambridge for over 50 years and made towering contributions to fluid mechanics, viscosity and optics.

Kearins argues a sense of place is as important for the development of scientists as it is for artists. She traces Stokes’s lifelong obsession with waves and fluid movement back to his childhood in Skreen, Co Sligo, close to the Atlantic Ocean, where she is from.