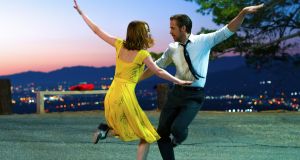 ‘La La Land’: This is a film that just has fun with itself, and generally, it’s “white” films that get to do that without anyone wondering where the bigger message is. It will win bigly. Photograph: Dale Robinette/Lionsgate via AP

The Oscars have always been political in terms of the reasons some films get loads of heat and certain stars are manoeuvred into award-winning situations. Maybe that politics is now benefiting people of colour if the Oscars are keen to correct their racial bias. Or maybe loads of very good films were made with black people in them.

As Franklin Leonard, the founder of blcklst.com tweeted, “Don’t dare doubt the merit of this year’s nominees because of #OscarsSoWhite unless you doubt every prior nominee because of white supremacy.” #OscarsSoWhite, by the way, was created by April Reign, a name often forgotten over the noise of the hashtag.

In this year of Oscar “diversity”, the biggest beneficiary is still La La Land, an overly praised film that tap dances merrily around the middle of the road and still gets a record-tying number of nominations without saying anything of significance at all, its artistic statement one of cute nostalgia.

Self-indulgent and frivolous, it is a series of mansplaining, jazzsplaining pastiches that serves as escapism in a time of doom. This is a film that just has fun with itself, and generally, it’s “white” films that get to do that without anyone wondering where the bigger message is. It will win bigly.

I’m reminded of something two of the cast members of one of the most diverse television shows around said: “as blessed as we are to have jobs and be on one of the hottest shows here, it’s kind of tricky because we’re still playing inmates,” Danielle Brooks of Orange Is The New Black told me in 2016, “I’m also doing The Colour Purple right now on Broadway, ” she said, “playing the role of Sofia that Oprah had originated, and I’m still playing someone that’s from the 1910s and was being beaten. [I’m] not saying that these stories aren’t valid and important because they definitely are, but I do look forward to playing roles that I have never seen someone like myself play. Not only for myself, but for that next generation, and not just of black women, but for all different races, and for men as well, that might feel that they are boxed in.”

This line between the obligation to tell one’s stories in a climate where representation is absent or marginalised, and wanting to tell stories where one’s identity is not of consequence, is not so much a line as a tightrope. But it’s also something that white people, and white men in particular, rarely have to negotiate.

I once spoke to a female comedian who said that she was sometimes jealous of her male counterparts, that they got to do stand-up about goofing around with their friends and so on, while there was an expectation on her to talk about her identity as a woman. We see this expectation in interviews with musicians, comedians, actors, and artists all the time. No one asks a guy what it’s like to be a man in the music industry.

Being non-white, non-straight, non-male (half the population), or a minority of any sort, society imposes a responsibility to represent one’s identity that most white people simply don’t have to deal with. Some people berate “identity politics”, yet constantly, in almost every genre of art and media, we design boxes for certain people to exist in, and get confused when they play outside them. I’m reminded of the head-scratching that surrounded Steve McQueen making the film Hunger. Would a white Englishman have faced so many “whys”?

When your stories haven’t been widely told, the first stop on the tracks of making art is a station about who you are. I sat on the board of Dublin’s GAZE International LGBT Film Festival for a few years, and over that time it was interesting to see contemporary queer cinema evolve. The coming out story of lesbian and gays on screen became a cliche, while as transgender films became more visible, that was the defining narrative, because it hadn’t been told before.

Gradually, LGBT cinema has moved beyond that first narrative to be about all kinds of stories that happen to include LGBT people. In regions where LGBT rights are progressing more slowly and face more opposition, the coming out story is still central to a lot of queer cinema.

There is a parallel with Irish cinema, which for many years mostly told stories about identity in the form of Irishness. There has been a welcome shift in recent years to genre films and more eclectic stories. The upshot of this is that in a golden era of Irish cinema, any story told by Irish people is an Irish story, and it is no longer hindered or constrained by having to be about Irishness itself. That’s when you get real diversity of storytelling. But it is as if minorities have to go through all the possible stories about identity before they are “allowed” tell stories that have little to do with identity.

Every filmmaker who isn’t white and who isn’t male is forced to play catch up with a film industry that has obsessed over white maleness and continues to. Of the top 100 films of 2014, 73.1 per cent of film actors were white (University of Southern California study). Out of the top 800 grossing films between 2007 and 2015, female directors totalled 4.1 per cent.

It is important for us all to talk about who we are. But the playing field will only be level – in cinema and other art forms – when people get the same choices in storytelling, the same opportunities in roles. We don’t need to be postracial or postgender, because race and gender are important. But we should also be mindful that we are still existing within an artistic context where the greatest freedom of expression and choice in making art is most often confined to those who rarely have their expression or identities marginalised or muted in the first place.

1 Ireland’s top earners ‘do not see themselves as rich’, study finds
2 Ellen DeGeneres apology: Why do her words sound hollow?
3 Dublin farmer discovers overnight rave on his land
4 Why are men still explaining things to women?
5 Air travel never going ‘back to way it was’
Real news has value SUBSCRIBE