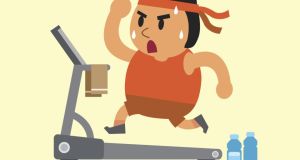 “When I got back to running a few years ago, I soon realised I couldn’t compete with my Duran Duran period”. Illustration: iStock

Of late, I often find myself looking down on people who go to the gym. This is not a snobbish thing; it’s purely geographical. It just so happens that a gym – a 24-hour one – opened at the end of my road last year. And it’s in a basement, overlooked by ground-level windows. So I can hardly avoid gazing down on its occupants, in passing.

But if not snobbery, the angle does lend itself to sceptical observation.

Sometimes it’s like being a scientist studying the behaviour of laboratory animals. In which vein, I’ve developed a grim fascination with the hamsters – treadmill runners and nordic-walkers – in particular.

It’s partly that their machines are all lined up together on the far side, facing a wall.

And it’s partly that the users tend to have earphones, isolating them from each other, or any kind of interaction. So when there are half a dozen in a row, pumping arms and legs, while not actually going anywhere, they can look a bit mad.

Mind you, on several nights a week, I pass them while out for a run myself. If they could see me, I’d probably look mad too.

I often feel it, when the wind is howling, my middle-aged knees are creaking, and my shorts are, like a third-party fire-and-theft insurance policy, not providing anything like the comprehensive coverage I need.

On such occasions, the indoor treadmill doesn’t seem a bad option. Unfortunately I have this old-fashioned need while running to get from point A to point B. So I continue to resist the temptations of the gym, in favour of Dublin’s three-dimensional streets and footpaths.

Actually, I do a gym class too, elsewhere. But that’s a small, group affair, with a supervisor and a name – “TRX” – that makes it sound dynamic and purposeful. I still don’t know what the letters stand for, although I’m fairly sure the “T” means “torture”. Certainly, the routine involves many of the things you’d expect in a medieval dungeon – straps, weights, etc.

And although the pain is sometimes added to by the 1980s soundtrack – Duran Duran inevitably included – that our instructor Marc believes is a vital aid to fitness, I’m sure the hardship is worth a minute or two off my 10K times.

Alas, the career of Duran Duran coincided with my peak as an athlete, even if I didn’t appreciate it then. I could probably have continued to improve during the heyday of later bands – Oasis, for example – had I not been distracted then by other things, such as work, parenthood, life in general. By the time I got back to training, the ship of youth had sailed.

Failing that, lifetime PBs (personal bests) are unlikely in your 40s or 50s.

When I got back to running a few years ago, I soon realised I couldn’t compete with my Duran Duran period, but that the Oasis era was a realistic target. So I now divide lifetime PBs into two categories – one for the 20th century (no longer attainable), the other for the 21st. That way, I can still beat records set by my younger self, if not in actual youth.

It remained possible until recently, and maybe still is.

But these days, I’m noticing that times I ran three or four years ago, believing them to be mere milestones en route to better things, are now hard to repeat, never mind better.

And I wonder if this is something I can still change – by training harder, say, or making lifestyle adjustments (giving up drink remains an option, albeit one I wouldn’t undertake lightly). Or could it be that I have reached that dreaded point where no amount of exercise and clean living can outrun inevitable decline?

That’s the other thought that haunts me when I look down on the treadmill people. Maybe, even while running outdoors, in three-dimensional space, freezing my butt off, I too am on a treadmill now. It’s a metaphysical treadmill, obviously.

But it means I have to work harder and harder, just to stay in the same place.