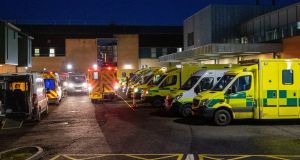 Ambulances at the entrance to the emergency department with a number of the vehicle with patients awaiting to be admitted, at Antrim Area Hospital, Co Antrim on Tuesday. Photograph: Liam McBurney/PA

Northern Ireland’s health services are under severe pressure with queues of ambulances forming outside Antrim Area Hospital on Tuesday as Covid-19 claimed 14 further lives across the island.

A further eight deaths and 329 new cases of Covid-19 were reported in the Republic by the National Public Health Emergency Team (Nphet).

On Tuesday afternoon, 196 patients were hospitalised, down from 215 the previous day. This included 31 in ICU, down two.

The national incidence was 84.7 cases per 100,00 people over the past 14 days. Donegal, Louth and Kilkenny had the highest county incidences while Clare has the lowest.

Meanwhile, the deaths of six more people with coronavirus were announced by the North’s Department of Health (DoH) on Tuesday, bringing the total number of fatalities to 1,135. A further 486 people tested positive for Covid-19.

The North’s Minister for Health said he will put new proposals to the Executive aimed at limiting the spread of coronavirus over the Christmas period.

Robin Swann told the Assembly he would bring forward a paper on Thursday with a “number of recommendations”. He declined to elaborate.

Northern Ireland emerged from a two-week “circuit-breaker” lockdown on Friday. From December 22nd to 28th, people in the North will be permitted to travel anywhere in the UK, and “bubble” with up to three other households from December 23rd to 27th.

However, there are growing concerns over the prevalence of the virus and the pressure on the North’s hospitals, with the Northern Health Trust’s operations director, Wendy McGowan, telling the BBC that patients were being treated in ambulances and up to 17 were queuing outside Antrim Area Hospital. “I have never seen ambulances queued like this before,” she said.

The hospital network was operating at over capacity on Tuesday, with 104 per cent of beds occupied, according to the Department of Health.

The First and Deputy First Ministers and the leaders of the other devolved nations in the UK spoke to the UK cabinet secretary, Michael Gove, on Tuesday evening about plans to ease the rules on household gatherings over the Christmas period.

A spokeswoman for the Ministers said they would now discuss the situation with medical and scientific advisers. “It is expected that an update will be brought to the Executive on Thursday,” the spokeswoman said.

The Deputy First Minister, Michelle O’Neill, said on social media it was “clear we are facing a very dangerous situation with the spread of Covid-19, the rise in hospitalisations and, sadly, people losing their lives.

“Sinn Féin will support any proposals brought forward by the health minister to tackle the current situation,” she said.

The North’s Chief Medical Officer, Dr Michael McBride, warned on Tuesday that “we are not where we need to be or should be in terms of the transmission of the virus” and it was important Christmas arrangements were “kept under review.”