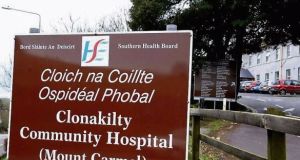 The HSE-run Clonakilty Community Hospital was found to be non-compliant on seven regulations during an unannounced Hiqa inspection over two days in June.

Multi-occupancy bedrooms at a HSE-run residential care facility in Co Cork had a “significant impact” on the management of a Covid-19 outbreak, the State’s health service watchdog has said.

The regulator called on the HSE to undertake a review of the management of the Covid-19 outbreak, in which 10 residents died, to ensure there are robust processes in place to adhere to national Health Protection Surveillance Centre guidelines “in the event of a further outbreak”.

The inspection report into the Clonakilty care home is one of 34 published by Hiqa into residential care facilities for older people on Tuesday, including a number that had Covid-19 outbreaks, multiple deaths and widespread staff shortages due to illness and self-isolation.

Inspectors found evidence of non-compliance at 23 care homes in areas such as infection control, residents’ rights, governance and management, and healthcare.

The HSE-run facility at Clonakilty was found to be non-compliant on seven regulations, or a third of the regulations checked, during the unannounced inspection over two days in June.

The HSE had appealed a direction from Hiqa to reduce beds to the District Court. However it dropped the legal action during the summer.

The number of residents at the home had dropped from 122 to 77 arising from the decision not to admit any new residents during the Covid-19 outbreak.

As a result of the reduction, bedrooms that previously accommodated five, six and seven residents now had a maximum of four, though the spare beds were not removed from the rooms.

Management was unable to clarify if this was a permanent or temporary arrangement.

Hiqa found there was still insufficient space for residents to sit at their bed sides due to the proximity of the beds to each other which mean they found it difficult to “personalise their space”.

During the two-day inspection, most residents were seen to spend a significant time in their bedrooms and residents had only recently commenced leaving their rooms after the outbreak.

“Photographs and memorabilia were usually stored over the head of the bed where it was not possible for residents to see them while in bed,” the inspectors said in the report.

One resident asked that photographs of family member be stored over a vacant bed on the opposite side of the room so that they could be seen from their own bed.

The multi-occupancy nature of the bedrooms “did not support residents to receive personal care in a manner that protected privacy and dignity,” the inspectors said.

Residents were complimentary of staff during the inspection and inspectors noted from discussions with staff there was “sadness at the loss of some residents during the outbreak”.

In a separate inspection of a Dublin care facility that suffered one of the worst Covid-19 outbreaks, Hiqa found Phoenix Park Community Nursing Units, part of the HSE-run St Mary’s Hospital in Dublin, was compliant or substantially compliant on nine regulations checked.

The June 2020 inspection, announced at short notice, was triggered by the outbreak that led to the deaths of 22 residents and up to 60 per cent of the staff being affected or forced to self-isolate.

The home was found to be “using best available evidence to ensure compliance with the regulations and standards” and was “predominantly in line with national guidance relating to infection prevention and control, with a small number of issues noted for improvement.”

Residents told inspectors it had been “difficult” not to see relatives during the pandemic but window or balcony visits had helped. They used expressions like “I’m okay” and “staff are very kind”.

“A number of those who were aware of the Covid-19 pandemic said it had been hard, and others said they were looking forward to getting back to normal,” the report says.