For marketers, Covid-19 rewrote the meaning of everything from ‘home’ to ‘friend’ 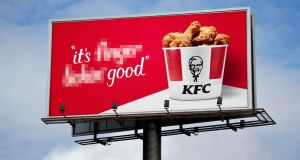 New rules of hygiene: KFC blurred out ‘finger lickin’’ from its advertising in August. Photograph: PA

Like Roger Sterling in Mad Men and everybody in 2020, I’m wondering when everything is going to get back to normal. Will it be when 70 per cent of the population has been vaccinated? Will it be after the ceremonial binning of the fabric masks? My new theory is that normality cannot be deemed to have fully returned until KFC makes the big call and reinstates its “finger lickin’ good” slogan, suspended in August on the grounds that not much can be classed as good in 2020 and absolutely nothing should be finger-lickin’.

Alas, while KFC was able to make a virtue of ditching its old line, other companies and organisations have been forced this year into more complicated rethinks. Did consumers even need them anymore? Will they, again?

One of the earliest casualties of the virus was the reusable coffee cup, which went from being an ubiquitous brand extension for projecting environmental credentials to an object that showcased pre-pandemic inflexibility – to present one to a barista was akin to handing over a biological weapon.

From there, it escalated quickly. Cities were next. Suddenly, they were padlocked and useless. Any brands that lingered on urban out-of-home advertising sites looked like they were trying to sell stuff to the 2020 equivalent of Cillian Murphy from 28 Days Later and maybe half a dozen gardaí.

Even after the summer reopening, cities’ stabs at reclaiming past glories were short-lived. In September, Dublin was dubbed a “disease reservoir” by the National Public Health Emergency Team (Nphet) – a line not expected to feature on the next Tourism Ireland city-break campaign. In November, the organisers of the capital’s Christmas lights ceremony alerted news media picture desks to the time and date with the plea not to reveal this to a soul beforehand, as it might jeopardise the event going ahead. Covid-19 had turned the rules of publicity upside-down.

If 2021 becomes the year of “the great reset”, as the theme-keen World Economic Forum contends it should be, then 2020 has been the year of “the great pivot” – the year when the world was turned off, then on again, only for millions of people to discover an alien operating system had been installed overnight and was propelling them into a new career.

The crisis ushered in a festival of new language almost as unnerving as the phenomena they described: cocooning, shecession, wet pubs, coronyism. You didn’t have to doomscroll on social media for too long to find either a Covidiot or the kind of perfect person who enjoyed railing constantly about Covidiots, while somebody, somewhere, was understandably having a quiet vomit at the phrase “blended learning”.

The vocabulary of advertising, however, seemed to narrow around a few basic phrases: “now, more than ever”, in these “unprecedented times”, brands were “here to help” us “stay connected” with the aid of some sombre piano music that then sped up into something semi-hopeful, as documented in a viral bang-to-rights supercut by a YouTuber called Microsoft Sam. Although the copywriters were apart, they had never been more together.

These ads were trite, yes, but there was a point in the late spring when people were in the mood for trite. A stockpile of cliches could be genuinely reassuring. And while anxieties led to flashpoints here and there – customers turned away for having the temerity to bring a child with them, for example – it was hard to seriously fault the supermarkets, now masquerading as places of wild adventure and social opportunity.

It was hard, too, not to feel sympathy for Ryanair despite its commitment to a perverse yet on-brand style of email marketing, characterised by pandemic-what-pandemic subject lines like “our latest Mega Sale deal is HUGE”, “this deal is a Christmas cracker!” and “Laura, it’s your lucky day!”

Meanwhile, public sector organisations from the HSE to An Garda Síochána to An Post saw their reputations rocket during Lockdown 1.0, when it turned out we needed a government so much, there simply wasn’t the time to form a new one.

But in a year in which personal freedom had to take second place to collective health, it is easy to trace a path to potential backlash.

“Home” is just one traditional staple of sentimental advertising subjected to a Covid redefinition that surely cannot last; in 2020, our homes were no longer merely our homes, but “unregulated places”. This wasn’t the only shift. The act of seeing people you didn’t live with was reshaped as reckless and frivolous “socialising”, your friends and family were now “contacts”, wanting to leave the country – or return to it – was a desire best kept to yourself, and watching Netflix was somehow patriotic.

If you time-travelled to the end of 2019 to reveal that “finger lickin’ good” would soon be toast – a wholly inappropriate no-no – most guesses why would revolve around an embarrassing quality control incident specific to KFC, not a life-encompassing pandemic that had reclassified permission to open a restaurant as a special Government treat. The reach of the regulations might be right, but that hasn’t made their introduction any less incredible to live through.

We will know the pandemic is truly over when not a second of this commentary on our private lives flies, but we can again. Fly, that is. What could be more normal than taxiing to the runway courtesy of one of the surviving airlines and worrying about all the stuff we used to worry about, like “is the engine supposed to sound so loud?” and “how old is that pilot anyway?”

No matter how hedonistic the rest of the decade turns out to be – very, is my forecast – the experiences we missed most in 2020 are the ones we will never take for granted again. Marketers know it, and they will use it.