Allegations of property theft by staff at Midlands Prison investigated 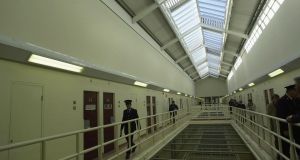 Whistleblower Noel McGree accused some prison staff of targeting him with intimidation and threats at the Midlands Prison. File photograph: Bryan O’Brien

Allegations of theft by staff at the State’s largest prison are being examined by gardaí from the National Bureau of Criminal Investigation (NBCI).

The investigation began in April after the Department of Justice passed on details of allegations of wrongdoing from retired prison officer and whistleblower Noel McGree in relation to property at the Midlands Prison.

The former officer made the allegations in a 230-page protected disclosure last November under Irish Prison Service (IPS) whistleblower procedures.

He accused some personnel in the jail, which has about 400 staff and holds 800 prisoners, of stealing prison property and selling it on for profit or using it themselves. He also accused some prison staff of targeting him with intimidation and threats, although this aspect is not believed to be part of the Garda investigation.

In one alleged incident, Mr McGree was allegedly threatened with being framed for bringing contraband into the prison.

The allegations remain unproven and a Garda source said investigations were still at an early stage.

The alleged criminal aspects of the complaints were sent by the department to Garda Commissioner Drew Harris in April.

Mr Harris subsequently passed the matter on to the Deputy Commissioner for Policing and Security, John Twomey, for investigation.

Detectives from the bureau who are leading the investigation have recently started interviewing witnesses. Mr McGree has said he is co-operating with the investigation and expects to make a formal statement soon.

Mr McGree previously made a separate protected disclosure detailing bullying, harassment and unfair penalisation by IPS management. These allegations were upheld in a review commissioned by the department to examine the complaints. The reviewer, retired judge Mr Justice William Early, referred to Mr McGree in his report as a sincere man who acted in good faith but who had been “penalised” and “isolated” by the prison service.

Issues regarding IPS procurement practices were raised by TDs at the Public Accounts Committee (PAC). Following a meeting with IPS director general Caron McCaffrey and the head of the Department of Justice, Oonagh McPhillips, the PAC agreed to recommend that Minister for Justice Helen McEntee seek an external investigation into account keeping at the IPS.

This followed on from concerns about procurement which were raised by the Comptroller and Auditor General in a 2019 report.

In January 2019, issues around the oversight of procurement processes in the prison service were raised at the PAC by Fianna Fáil TD Marc McSharry, who said it put oversight issues at the Garda College in Templemore “into the ha’penny place”.

The Garda declined to comment on a “live investigation”, except to say it was “investigating a complaint” relating to the Midlands Prison.

IPS management last year tightened financial protocols within the prison and initiated a review of certain areas of internal governance.