Fines for breaches of stay-at-home requirements under consideration 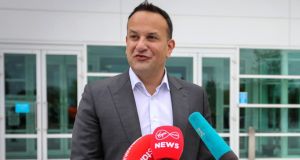 Tánaiste Leo Varadkar said limited mandatory hotel quarantine may in time be extended, if it is approved by the Cabinet’s Covid subcommittee. Photograph: Crispin Rodwell

Ministers will today examine whether to intensify checks on people quarantining at home after travel, with fines under consideration for those found not to be complying with “stay-at-home” obligations.

It is understood some Ministers want to strengthen arrangements for those required to isolate after travelling abroad, even with a negative PCR test, with mandatory home quarantine under consideration alongside spot checks and stronger penalties to ensure compliance.

Tánaiste Leo Varadkar has said a limited mandatory hotel quarantine for those arriving in the State without a negative test result, or from variant hot spots, may in time be extended, if it is approved today by the Cabinet’s Covid subcommittee.

He said this would be “challenging and could take a few weeks to operationalise but would give us the advantage of learning how to do it successfully should the policy be widened to more incoming travellers at a later point”.

He said the subcommittee will consider steps “to tighten the net on Covid” with a view to “keeping out new variants and reducing other domestic spread”.

The Tánaiste said from the point of view of business and jobs, “being able to get Covid down to a low level so that we can reopen our domestic economy again is much more important than being able to travel abroad”.

He cautioned that supply chains for fuel, medicines, vaccines and other goods must be maintained.

With the UK reportedly considering some form of mandatory hotel quarantine, Mr Varadkar said a two-island strategy “could have real merit”. He said even hotel quarantine for all arrivals would not stop new variants coming into the State “without an all-island dimension”.

A spokesman for Minister for Health Stephen Donnelly said he supports tighter border controls and stronger enforcement, and while a recently-introduced requirement to take a pre-travel PCR test will help, it is “not sufficient and that further measures are needed”.

Government sources said follow-up calls and visits to those who are isolating in their homes will be examined, alongside options for fines, and a tighter definition of essential travel. Proposals to limit travel from variant hotspots, including bans or visa restrictions, will also be considered.

It is understood there may also be proposals to allow an early exit from any new at-home quarantine arrangements for people who obtain a second negative PCR test after five days.

The Government will have to consider who will be responsible for policing any new arrangements. The Department of Health has expressed concern previously that it was given responsibility for dealing with passenger locator forms, while putting extra demands on the Garda could raise concerns in the Department of Justice.

Meanwhile, Government sources said most children will not be back in school next month and may not return to the classroom until close to Easter. While a full return to school is unlikely until the second half of March, sources say there remains a determination to reopen special education next month if transmission rates continue to fall.

A further 23 deaths of Covid-19 patients were reported by the National Public Health Emergency Team yesterday, bringing the total number of deaths in the pandemic to 2,970. It also reported 1,378 further cases of the disease, bringing to 187,554 the total recorded to date.