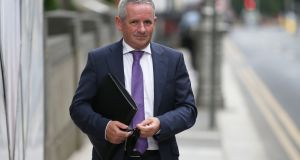 Passengers required to quarantine after arriving in Ireland may be asked to contribute towards the costs under new measures being discussed by the Cabinet subcommittee on Covid-19.

The details of the measure are expected to be discussed later on Monday.

Close contacts of confirmed cases have not been referred for testing since December 31st as the system became overwhelmed by the spike in cases over the Christmas period. Text notifications warning a close contact had tested positive were sent out and those contacted were asked to restrict their movements.

Mr Reid told Newstalk Breakfast on Monday if there was a “consistent level” below 2,000 daily cases this week, the HSE “would be very anxious to get back to the testing of all close contacts”and get back to a system of full operation.

There were 1,930 patients with Covid-19 in hospital and 219 in intensive care (ICU) on Sunday night, according to the HSE’s daily operating figures.

At Monday’s meeting, Ministers are expected to examine whether to intensify checks on people quarantining at home after travel, with fines under consideration for those found not to be complying with “stay-at-home” obligations.

It is understood some Ministers want to strengthen arrangements for those required to isolate after travelling abroad, even with a negative PCR test, with mandatory home quarantine under consideration alongside spot checks and stronger penalties to ensure compliance.

The committee is also due to receive fresh guidance over the reopening of schools from public health experts, with Government sources saying most children will not be back in school next month and may not return to the classroom until close to Easter.

At the weekend, Taoiseach Micheál Martin said he believed schools will most likely reopen in a phased way, but not all students would be back at school by St Patrick’s Day.

Talks over contingency plans for the Leaving Cert are to intensify this week amid growing expectation that a formal decision on the future of the exams will be made shortly.

The Department of Education is due to meet with secondary education partners to discuss “further possible options” for the exams.

Ms McDonald said anyone entering the country should have to provide a negative Covid-19 test and carry out a mandatory 14-day quarantine. She told RTÉ’s Morning Ireland such a measure would be “absolutely proportionate” and must be island-wide.

With the UK reportedly considering a form of mandatory hotel quarantines for incoming travellers, Tánaiste Leo Varadkar has said a two-island strategy “could have real merit”. He said hotel quarantine for all arrivals would not stop new variants coming into the State “without an all-island dimension”.

The Democratic Unionist Party’s Jeffrey Donaldson has said that a suggestion that flights and ferries from the UK to Northern Ireland should be stopped in a bid to halt the spread of Covid-19 was “completely untenable”.

Air and sea links are important for the economy, he told the same programme.

“We’ve already said that people should not make non-essential journeys across the Irish Sea,” he said, adding if flights and ferries were stopped, it would mean that the “entire public sector” would have to be shut down.

Mr Donaldson said the North still did not have access to travel locator forms for people who arrived into Dublin and then went on to the North. The issue had been with the Irish Government for nine months, he said.

“We have been told by the civil service that it is a political decision to allow the sharing of this information.”

While Mary Lou McDonald expressed her strong opposition to a suggestion by Labour leader Alan Kelly that checks could be carried out at the Border between Northern Ireland and the Republic, Mr Donaldson said it would be a “matter for the Irish Government”.

Minister for Health Stephen Donnelly said on Monday, 143,000 vaccine doses had been issued in the State as of Sunday. He said on Twitter this was a great result and a tribute to all involved.

The High-Level Task Force on Covid-19 Vaccination is due to meet on Monday to discuss the delay to the delivery of the AstraZeneca vaccine to European Union countries.

Governments were informed of the delay in a meeting between member states and the European Commission on Friday to discuss the joint EU vaccination procurement programme.

Ireland had expected to receive 600,000 doses of the AstraZeneca vaccine in the first quarter of the year.

Mr Reid said previous commitments made by AstraZeneca for February deliveries still stand and the HSE will begin the process of vaccinating people over the age of 70 through general practitioners and pharmacies.

However, it is unclear how many of the over-70s cohort will be vaccinated with the supply.

He expects clarity in relation to delivery of the vaccine for March and April will be sought at European level later on Monday.

As discussions about future vaccine deliveries are due to get under way, there have been calls for greater transparency about who has had the Covid-19 vaccine and how many frontline workers have yet to be vaccinated.

Consultant Dr Matthew Sadlier of the Irish Medical Organisation (IMO) said there should be a “definitive list” for every hospital for vaccinations for frontline staff, showing “who is left to be vaccinated and how they are going to manage it going forward”.

He said he had some sympathy for the HSE because it was obvious there was a shortfall.

Speaking on RTÉ radio’s Morning Ireland, Dr Sadlier said at present there are 6,000 frontline workers off work because of Covid issues and it was not acceptable that there was no plan for frontline workers to be vaccinated as soon as possible.

Dr Sadlier said with nearly 2,000 Covid patients in hospitals at present, every ward is a Covid ward.

Meanwhile in Cork, there has been an “overwhelming response” to Cork University Hospital’s appeal for staff to redeploy to its intensive care unit at the weekend, Dr Orla Healy, chief operations officer of the South/South West Hospital group, said.

On Friday, three additional ICU beds needed to be opened so the hospital asked multidisciplinary teams to redeploy to the unit.

More than 70 doctors, nurses, GPs and staff from other hospitals volunteered to be redeployed and have since been rostered.