Virus numbers will double in the next fortnight if action is not taken, public health officials warn 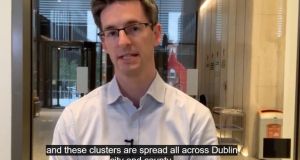 Dr Ronan Glynn: ‘It’s all time for us to redouble our effort to say safe.’

The rise in cases in Dublin is being driven by household transmission, the acting chief medical officer Dr Ronan Glynn has stated.

Dr Glynn said there were “lot of cases” concentrated in household clusters, and they are in all parts of Dublin city and county.

In a personal message to people living and working in Dublin, Dr Glynn asked people to limit their social contacts “as much as possible”.

In a video message posted on the Department of Health website and on social media, he said: “Avoid crowds. Prioritise the people you need to see, but keep groups small and see them regularly rather than meeting lots of people from lots of different households.

We are seeing lots of cases clustered in households and these clusters are spread all across Dublin city and county - Dr Ronan Glynn.

“Concentrate on your core circle over the coming weeks. I know you know the core messages, but it’s all time for us to redouble our effort to say safe.

“You need to act as if you have the virus to protect friends and family and colleagues going about your day.

“I know it is a big challenge but keeping your little bit of distance from others is really important while we live with the threat of this virus. Your individual actions do work.”

He warned cases in will double in Dublin in the next fortnight if trends continue as they are doing.

“We are seeing lots of cases clustered in households and these clusters are spread all across Dublin city and county”, Dr Glynn added.

Fortunately, the “vast majority” of cases in Dublin are in young people and the rates of hospitalisation are low, he added. He also said that rates of community transmission, where cases cannot be linked to other cases, are broadly the same in Dublin as it is elsewhere in the country. “This provides a window of opportunity to bring the disease under control. We all need to act now to break the trains of transmission,” he said.

Dr Glynn said cases are currently growing at 4 per cent per day in the capital and the R0, the reproduction rate, is 1.4.

A direct message to people living or working in Dublin to explain where we are currently and what we can all do to get where we need to be with #COVID-19. Your individual actions really do matter. They all count. They do work. #HoldFirm [For Closed Captions, select "cc".] pic.twitter.com/fbZlexdOVl

Dr Glynn said there has been 1,055 cases in Dublin in the last 14 days and cases are rising at an average of 104 per day.

Trinity College Dublin Professor of Experimental Immunology Kingston Mills said approximately half of all people who are testing positive for Covid-19 at present have no symptoms.

Most instances of the disease are now happening in young people who often are not affected by it, but can spread to more vulnerable people, he warned.

He suggested that we should not let strangers into our homes and hold outdoor gatherings where possible when we are meeting people.

Speaking to the RTÉ Radio One with Brendan O’Connor, Prof Mills said we should assume that people are infected with the disease and act accordingly.

He suggested that people should wear masks when are speaking to each other in indoor settings.

Parts of Dublin have Covid-19 infection rates 2½ times as high as neighbouring areas in the capital, according to the latest figures from the Health Protection Surveillance Centre (HPSC).

For example, the number of cases appearing in Dublin South East – including parts of the south city centre and Dundrum and Ballinteer – are 155 per cent higher than those being found in Dublin South.

The figures cover cases as recorded by the HSE local health office (LHOs) areas, which have been collated by David Higgins, an economist with Carraighill data analysts.

Dublin South East, which stretches from Baggot Street through Rathmines and Ranelagh to Leopardstown and Sandyford, recorded 93.8 Covid-19 cases per 100,000 people in the 14 days between August 27th and September 9th.

Meanwhile, Dublin South, which comprises of Dún Laoghaire, Stillorgan, Foxrock and down to Loughlinstown, recorded just 36.7 cases of Covid-19 per 100,000 in the same period.

Dublin North West, which stretches from Cabra to Mulhuddart and includes many recently-built areas in west Dublin, is another hot spot for the disease, with an instance of 83.8 cases of Covid-19 per 100,000.

Across the capital an average of 73.2 Covid-19 cases per 100,000 people is now being recorded, which is a significant increase on cases collated between August 20th and September 2nd, and August 27th and September 9th.

The worst affected area, Dublin South East, had 44.5 more weekly cases in the week between September 2nd and 9th as it did between August 20th and August 27th. Dublin North, by contrast, had 35.8 extra cases between that time.

Ranelagh-based GP Dr Maitiu Ó Tuathail said the differences between Dublin South and Dublin South East is explained by demographics. Those who live in Dublin South are older and more settled, he suggests.

“We have a large population of young people who work in tech and attend college. We have seen increases in demand for tests weeks ago, and it has just steadily been increasing since lockdown measures were reversed,” he said.

“The Ranelagh, Rathmines, Grand Canal area has a very sociable demographic. It fits the current trend in statistics that we are seeing with the majority being under 45.

Dr Ray Walley, a GP based in Glasnevin, which is part of the Dublin West area, said the high numbers currently in his area may be explained by higher poverty and more people living together.

Black, Asian and middle-eastern communities have already been shown in the UK to be more vulnerable to Covid-19, and the same may be occurring in north and west Dublin, both of which have higher immigrant numbers.

“They are a more vulnerable group and they are looking into why that it is – it may be vitamin D deficiency,” he said.