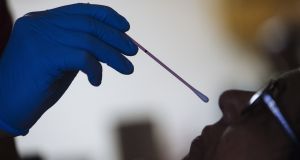 Mass testing will continue in nursing homes, the highest-risk setting given how vulnerable older people are to the virus. Photograph: Angus Mordant/Bloomberg

The rise in coronavirus cases and suspected infections has forced the Health Service Executive to reprioritise and ultimately ration its Covid-19 testing given its capacity to conduct 100,000 tests a week.

When the virus was at lower levels in the community, testing could be focused on asymptomatic cases to catch the virus in riskier settings such as nursing homes and meat plants.

In recent weeks, the rise in infections and the increased number of people contacting their GPs with symptoms has forced the HSE to change approach to focus on those who may have the disease.

The first warning sign for the HSE came on Monday when there were 13,000 referrals for testing from GPs, more than double the figure for the previous Monday.

Not all tests would be done that day but a further 8,000 referrals from GPs the following day meant the HSE had to “triage” testing to staying with the daily limit of 14,000 to 15,000 tests.

Schoolchildren with respiratory tract infections and people showing symptoms of the disease in north Dublin where infections are higher accounted for a large proportion of the referrals.

Some 13,000 referrals from GPs might be manageable if that was all the system had to test, but there can be 2,000 to 4,000 Covid-19 tests required in hospitals on a given day, so the serial testing was going to fall victim in order to test sick people and still not breach the daily limit.

Outbreaks in food processing plants were the cause of local lockdowns in Kildare, Laois and Offaly last month – and the HSE is still testing in those plants when there are outbreaks – but mass testing in these settings has been postponed to save testing capacity for symptomatic referrals.

The HSE justified this by noting that the positivity rate in symptomatic testing was running at six times the rate in serial testing in meat plants. Mass testing will continue in nursing homes, the highest-risk setting given how vulnerable older people are to the virus.

HSE chief executive Paul Reid said it had 350 swabbers and 280 contact tracers working on any given day, all on 12-hour shifts, seven days a week. The health service is seeking to recruit permanently for 700 swabbing jobs and 500 contact tracers as it seeks to move from the war footing of recent months to an established system for Covid-19 testing and tracing.

He hinted that the HSE may have to look at increasing the 100,000 weekly testing capacity if necessary. Based on the recent trend of increasing infections and referrals from the community, the permanent regime may require much greater capacity to tide the health service through the winter.