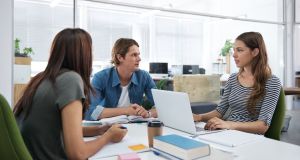 This year’s Leaving Cert students were aware when they reflected on their final course choices in June that their teachers were in the process of determining their percentage achievement score through the calculated grades process.

Significant numbers amended their application lists to place higher points courses at the top of the list in the hope that their teacher’s positive perspective would lift their points score.

The cumulative effect was that the number of H1s submitted to the Department of Education and Skills (DES) increased by almost 250 per cent. The numbers of H1s and H2s were off the scale compared to previous years.

The algorithm devised by the Department of Education stripped back excessively high marking where it occurred, and awarded grades accordingly.

The fact that many high points courses have gone up directly as a result of the marks awarded by teachers only increases the sense of anger among families affected.

Educational authorities put in an incredible effort to devise a system which would pass the “public-perception-of-fairness test”.

It would seem that they have passed that test with some superficial wounds, but nothing fatal which could have crashed the system over the coming days.

There are anomalies but on the whole even though many were disappointed with the course they were offered, it was probably the one they would have secured had the Leaving Cert exams taken place as normal.

With a 10 per cent mean average increase in grades within higher papers it was always inevitable that those who had delayed their application to college, or were reapplying for a new course having dropped out of one previously, would be squeezed by the process.

Looking at UCD engineering as an example, it had 265 places last year and while an additional 54 places were added this year it still went up 20 points from 511 to 531. This pattern has been repeated across the entire system, leaving many disappointed applicants in its wake.

The 2020 CAO points requirements are on average 7 per cent ahead of last year, but are considerably lower than they would have been if extra places had not been allocated to colleges.

Maynooth university, for example, currently has two classes of 30 in the primary school teaching programme. By offering a further 28 places on this programme, the CAO points increase was kept down, going from 499 to 507.

This level of increase would probably be politically acceptable to most people. But without the extra places the fallout would have been considerable. Such an outcome could have brought about the collapse of the college application process, as occurred in the UK and Northern Ireland.

By putting students at the centre of the assessment process and leaving a considerable level of grade inflation present, the DES should pass the test.

There are many students and parents still lobbying to have the entire process opened up due to a perceived sense of unfairness in relation to the reduction in some teachers’ assessed grades. The courts may yet have their say in this matter.

On balance by creating additional places across all of the pressure points in the CAO system, the point increases should have been kept down sufficiently to convince most observers that the Government has done the best job possible in difficult circumstances.

The coming days will test this hypothesis.