Covid-19 contact-tracing calls fell more than half during May

Calls fell from 8,000 a week at start of month to 3,800 as incidence of virus diminished 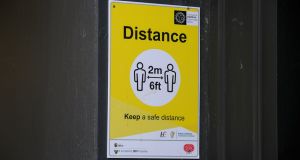 The vast majority of contract tracing is now completed within 24 hours of being uploaded on to the “Covid care tracker” system. Photograph: Gareth Chaney/Collins

The number of contact-tracing calls made to track down possible Covid-19 infections each week by the Health Service Executive more than halved during May, according to new official figures.

Eight thousand calls were made to close contacts of confirmed Covid-19 positive cases in the week ending May 2nd. This dropped to about 6,800 per week in the following two weeks.

However, the number of calls fell dramatically to 3,800 contacts for the week ending May 23rd, as the incidence of the virus reduced in the community, according to a spokeswoman for the HSE.

In April, the average time taken to complete contract tracing was 72 hours. However, the vast majority, both complex and routine, are now completed within 24 hours of being uploaded on to the “Covid care tracker” system.

“If all the data is available and a record is loaded on to the Covid care tracker at 11am, the process will be completed by 6pm that evening,” the HSE spokeswoman said.

Contact tracing can be delayed by the lack of telephone numbers for people who need to be contacted. “This has undoubtedly caused delays, and while it has improved greatly in recent weeks, it still creates challenges,” the spokeswoman said.

The number of people not responding to calls varies from 1 or 2 per cent to more than 10 per cent. “It is not possible to confirm the number of close contacts who the HSE are unable to contact,” the spokeswoman said.

Contact tracing can be more difficult to complete if people have been in congregated settings before they tested positive for Covid-19. “It can involve multiple calls to the person in charge, and more complicated calls,” the spokeswoman said.

“There can be difficulties in making contact with the confirmed case, or with their contacts, so while every effort is made to contact trace all confirmed cases, some will not have been completed.”

The HSE’s IT systems have undergone “very significant improvements” since mid-March despite ongoing challenges. “The system was designed as the pandemic arrived, and there have been challenges at every stage.

Tramore-based GP Dr Austin Byrne said contact tracing was now taking 48 hours from receipt of sample, but warned the system required further improvement in advance of a second wave of the virus.

“Contact tracing appears to be coping well with current numbers but needs to be upscaled in advance of any second wave,” he said.

“We are told it’s taking 48 hours from receipt of sample. But there are very few tests now . . . which means very few for tracing.”