Covid-19: 21 more deaths reported in North as lockdown is extended until March 5th 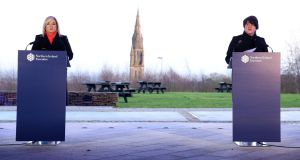 The coronavirus lockdown restrictions in force in Northern Ireland are to be extended until at least March 5th.

The North’s Ministers agreed to a further month of lockdown at a meeting of the Executive on Thursday. However, Ministers did not rule out a potential further extension to the lockdown beyond March 5th, and there have been suggestions the restrictions could last until Easter.

The restrictions, which had been due to expire in two weeks prior to Thursday’s decision, will be reviewed again on or before February 18th.

At a press conference following the Executive meeting on Thursday, the North’s First Minister, Arlene Foster, said Ministers did not want to keep restrictions in place any longer than was necessary, but the decision to extend had been made based on advice from the Minister for Health which highlighted the “continued pressure” on Northern Ireland’s hospitals and intensive care units, as well as the threat posed by new Covid-19 variants.

“This week the NHS is facing the peak of Covid demand and the system is truly struggling to cope,” she said. “The Executive today has reviewed the current restrictions and agreed they remain an appropriate and necessary response to the serious and imminent threat posed by Covid-19.”

Under the lockdown measures, which came into force in Northern Ireland on St Stephen’s Day, non-essential retail and the hospitality industry have been closed, employees should work from home where possible and people must only leave their homes for essential purposes.

Most schools have been closed until the midterm break in February, with learning moved online. The Ministers for Health and Education are expected to take part in discussions regarding the continued closure of schools in the coming days, and Minister for Education Peter Weir is due to bring a paper on the issue to the Executive next week for discussion by Ministers.

The Sinn Féin Deputy First Minister, Michelle O’Neill, said Ministers had discussed “the fact that there may well need to be further restrictions”, but this would depend on people’s actions and how well they followed the rules. “There’s an additional four weeks [of lockdown restrictions], and there may well be something after that, but it’s within our control in terms of our own behaviours around what we do in the next number of weeks,” she said.

Ms O’Neill said it was possible the restrictions would be extended again until Easter, which falls in early April.

Minister for Health Robin Swann had said on Wednesday evening that it was “not the time to open any floodgates” or to “take premature decisions that would lead to another spike in cases”.

A further 21 people with Covid-19 have died in Northern Ireland and 732 more people have tested positive for the virus, the North’s Department of Health reported on Thursday.

It brings the total number of fatalities from Covid-19 recorded by the department to 1,692.

According to the latest figures from the department, 131 people with coronavirus died in the last week in the North, the same number as in the previous seven days.

Meanwhile, the chief executive of the Belfast Health and Social Care Trust, Dr Cathy Jack, has welcomed the assistance of medically trained British military personnel in the North’s Covid-19 response.

She told a meeting of the Stormont health committee on Thursday that the medical technicians would work under the direction of trust management, and in Belfast would be deployed in the temporary critical care Nightingale hospital facility.

“Through this pandemic retirees, students and volunteers have all come in to help us, and we have welcomed them,” she said.

“This is another group of highly trained individuals that will support my staff to support the patients and deliver the care they need, and I welcome this.”

The regional secretary of the trade union Unison, which represents many healthcare workers and support staff in Northern Ireland, on Thursday clarified the union’s position on the use of military medical staff, following controversy over a statement in which the union said it had not been consulted on their use.

“Unison has not objected to assistance from military personnel,” regional secretary Patricia McKeown said. “Unison has publicly supported the efforts of the health minister to confront the pandemic in all too often difficult political circumstances.”

She said the union wanted “detailed information on how, when and where external personnel will be deployed and what the management and accountability structures will be for them”, and it was now “anticipating an early engagement with the Minister [for Health]”.

The leader of Aontú, Peadar Toíbín TD, told the BBC’s Talkback programme on Wednesday that “we would really caution against the British army being involved in hospitals at all . . . this is going down like a ton of bricks in nationalist and republican areas, we should not be politicising the health service”.

Sinn Féin has not opposed the move to use the personnel, saying in a statement on Wednesday that it did not rule out any measures to save lives and protect the health service, and that “any effort to make the threat posed by Covid-19 into a green and orange issue is divisive and a distraction”.

On Thursday the chief executives of three of the North’s health and social care trusts appeared before the Stormont health committee to update it on how their areas were coping with the surge in patients with Covid-19.

According to the latest figures from the Department of Health, on Thursday afternoon, 806 people with coronavirus are receiving hospital treatment in the North, and 70 of them are in intensive care.

Shane Devlin from the Southern Trust told the health committee that the hospitals in his area treated 272 patients with Covid-19 last week, compared with 63 patients at the height of the first surge, and staff were dealing with numbers “way over and above anything we ever imagined”.

Jennifer Welsh of the Northern Trust said the hospitals in her area remained under “significant pressure” and they expected the numbers in intensive care to increase further.

“While we welcome the reduction in new positive cases, it is certainly not a time for complacency and it is clear that a return to normal is still some way off,” she said.

Dr Jack offered her “sincere apologies” to all those who had had surgeries cancelled, particularly cancer patients, because of the pandemic, and acknowledged that this would mean some patients would not survive.

She said that for a “small but significant portion of people, when they come into surgery, it will be too late . . .”

“And I cannot apologise enough,” she said. “But you know what? This virus doesn’t spread by itself, it spreads by people who carry the virus, and everybody in Northern Ireland needs to play their part so we can get back on track and treat the patients that we desperately want to treat.” Additional reporting: Reuters