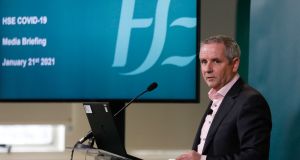 HSE chief executive Paul Reid has described the situation in Irish hospitals as being of the “highest level of concern” yet during the pandemic with almost 2,700 people admitted with Covid-19 over a two week period.

The numbers in hospital with the disease increased by 10 per cent last week, with those who became infected during the peak of the current surge now being hospitalised.

There were 1,949 people in hospital on Thursday morning with 214 in intensive care units (ICU). An additional 300 people are receiving advanced respiratory support while half the patients in ICUs with Covid-19 are on ventilators. The average number of daily admissions for the last week has been 132.

Mr Reid said there had been two days of falling numbers, but not enough to suggest a trend. He expressed fears that the hospital system will not cope if there is another surge in numbers.

Speaking at a HSE media briefing on Thursday afternoon, Mr Reid said the current mortality rate from Covid-19 was a “stark and horrible reminder” of how deep the impacts of the current wave had been. There have been more than 500 deaths so far in January.

Mr Reid revealed that a total of 121,900 Covid-19 vaccinations have been provided in the State to date and there are signs that the third wave of the disease is bottoming out.

The total number vaccinated is the equivalent of some 2.5 per cent of the population, with some 48,000 doses provided to people living and working in more than 200 long-term residential care settings. In addition, 73,100 vaccines have been provided to healthcare workers in seven hospital groups. Residents in 589 long-term care facilities are due to have received their first vaccination by Sunday.

Mr Reid acknowledged there were many healthcare workers who were frustrated having not had the vaccine yet. “There are many justifiable cases for vaccination right now. We have a limited supply. That’s the reality.”

He criticised the fact that people who were not due to receive the vaccine had done at the Coombe and Rotunda hospitals in Dublin and another in Co Kerry.

“It shouldn’t have happened. Nobody needed further clarity about the agreed sequencing of the vaccines,” he said. “That being said, wasting vaccines is something we should avoid.”

The board of the Coombe hospital said it had appointed Brian Kennedy SC to carry out an independent review into how 16 family members of hospital employees, including children of the hospital’s master, received vaccines there on January 8th. The board said it expects the review to be completed within weeks, given the “serious nature of the matter.”

Mr Reid warned that the number of people vaccinated next week would not be as high as planned because manufacturer Pfizer is temporarily lowering its production levels. He said this delay was temporary but a cause of “great frustration” for the HSE.

The HSE said January 27th would be the first anniversary of its Covid-19 crisis management team. They were then preparing for a virus which was deemed a “moderate risk” by the European Centre for Disease Prevention and Control.

“Nobody at that stage could have forecast that we would be experiencing a third wave and the worst impacts of the effects of the virus this year,” Mr Reid said.

“There has been huge hurt and pain for so many families and particularly not being able to grieve as people used to.

“It looks like we are stuck in a dead end, but we are not . . . It may take that bit longer than we want (to vaccinate everyone) and that is purely based on supply. We will be operating at pace.”