Donnelly says he spoke in ‘unacceptable and inappropriate way’

Health Minister Stephen Donnelly TD has apologised in Dáil Eireann for recently speaking with the Leas Ceann Chomhairle Catherine Connolly TD in the chamber in an ‘unacceptable and inappropriate way’. Video: Oireachtas TV 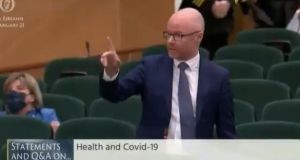 Minister for Health Stephen Donnelly has apologised for the way he addressed Leas Cheann Comhairle Catherine Connolly in the Dáil last week.

Mr Donnelly made the apology in the Dáil on Thursday during a question and answer session.

He had been sharply criticised on social media after he insisted on answering a question in the chamber when the allotted time was up.

The Leas Cheann Comhairle had granted him extra time, during which he complained about the speaking time allocated to other TDs, pointing his finger at Ms Connolly.

She rebuked him and told him his time was up. Mr Donnelly was then caught on microphone saying “unf***ingbelievable” as he sat down.

Mr Donnelly said on Thursday that he spoke “in what was without doubt an unacceptable and inappropriate way” to the chair and it was something he “sincerely regrets”.