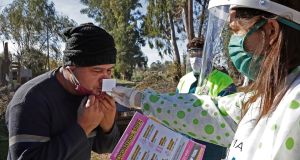 In a perfect world, the entrance to every office, restaurant and school would offer a coronavirus test – one with absolute accuracy, and able to instantly determine who was virus-free and safe to admit and who, positively infected, should be turned away.

That reality does not exist. But as many countries struggle to regain a semblance of normal life amid the uncontrolled spread of the virus, some scientists think that a quick test consisting of little more than a stinky strip of paper might at least get us close.

The test does not look for the virus itself, nor can it diagnose disease. Rather, it screens for one of Covid-19’s trademark signs: the loss of the sense of smell. Since last spring, many researchers have come to recognise the symptom, which is also known as anosmia, as one of the best indicators of an ongoing coronavirus infection, capable of identifying even people who don’t otherwise feel sick.

A smell test cannot flag people who contract the coronavirus and never develop any symptoms at all. But in a study that has not yet been published in a scientific journal, a mathematical model showed that sniff-based tests, if administered sufficiently widely and frequently, might detect enough cases to substantially drive transmission down.

Smell tests could work as a point-of-entry screen on college campuses or in offices, perhaps in combination with a rapid virus test

Daniel Larremore, a public health researcher at the University of Colorado, Boulder, and the study’s lead author, stressed that his team’s work was still purely theoretical. Although some smell tests are already in use in clinical and research settings, the products tend to be expensive and laborious to use and are not widely available. And in the context of the pandemic, there is not yet real-world data to support the effectiveness of smell tests as a frequent screen for the coronavirus. Given the many testing woes that have stymied pandemic control efforts so far, some experts have been doubtful that smell tests could be distributed widely enough, or made sufficiently cheat-proof, to reduce the spread of infection.

“I have been intimately involved in pushing to get loss of smell recognised as a symptom of Covid from the beginning,” said Dr Claire Hopkins, an ear, nose and throat surgeon at Guy’s and St Thomas’s Hospitals in the UK and an author of a recent commentary on the subject in The Lancet. “But I just don’t see any value as a screening test.”

A reliable smell test offers many potential benefits. It could catch far more cases than fever checks, which have largely flopped as screening tools for Covid-19. Studies have found that about 50 per cent to 90 per cent of people who test positive for the coronavirus experience some degree of measurable smell loss, a result of the virus wreaking havoc when it invades cells in the airway.

“It’s really like a function of the virus being in the nose at this exact moment,” said Danielle Reed, associate director of the Monell Chemical Senses Center in Philadelphia. “It complements so much of the information you get from other tests.” Last month, Reed and her colleagues at Monell posted a study, which has not yet been published in a scientific journal, describing a rapid smell test that might be able to screen for Covid-19.

In contrast, only a minority of people with Covid-19 end up spiking a temperature. Fevers also tend to be fleeting, while anosmia can linger for many days.

A smell test could also come with an appealingly low price tag, perhaps as low as $0.50 (€0.41) per card, said Derek Toomre, a cell biologist at Yale University and an author on Larremore’s paper. Toomre hopes that his version will fit the bill. The test, the U-Smell-It test, is a small smorgasbord of scratch-and-sniff scents arrayed on paper cards. People taking the test pick away at wells of smells, inhale and punch their guess into a smartphone app, shooting to correctly guess at least three of the five odours. Different cards contain different combinations of scents, so there is no answer key to memorise.

Toomre estimated that the test could be taken in less than a minute. It is also a manufacturer’s dream, he said: A single printer “could produce 50 million of these tests per day.” Numbers like that, he argued, could make an enormous dent in a country hampered by widespread lack of access to tests that look directly for pieces of the coronavirus.

In many cases of Covid-19, smell loss can linger long after the virus is gone and people are no longer contagious – a complication that could land some people in a post-Covid purgatory

In their study, Larremore, Toomre and their collaborator, Roy Parker, a biochemist at the University of Colorado, Boulder, modelled such a scenario using computational tools. Administered daily or almost daily, a smell screen that caught at least 50 per cent of new infections was able to quash outbreaks nearly as well as a more accurate, slower laboratory test given just once a week.

Such tests, Larremore said, could work as a point-of-entry screen on college campuses or in offices, perhaps in combination with a rapid virus test. There might even be a place for them in the home, if researchers can find a way to minimise misuse.

“I think this is spot on,” said Dr Carol Yan, an ear, nose and throat specialist at the University of California, San Diego. “Testing people repeatedly is going to be a valuable portion of this.”

Toomre is seeking an emergency use authorisation for the U-Smell-It from the US Food and Drug Administration, and he has partnered with a number of groups in Europe and elsewhere to test it under real-world conditions.

Translating theory into practice, however, will come with many challenges. Smell tests that can reliably identify people who have the coronavirus, while excluding people who are sick with something else, are not yet widely available. (Hopkins pointed to a couple of smell tests, developed before the pandemic, that cost about $30 [€25] each and remain in limited supply.) Should they ever be rolled out in bulk, they would inevitably miss some infected people and, unlike tests that look for the actual virus, could never diagnose disease on their own.

And smell loss, like fever, is not exclusive to Covid-19. Other infections can blunt a person’s sense of smell. So can allergies, nasal congestion from the common cold, or simply the process of aging. About 80 per cent of people over the age of 75 have some degree of smell loss. Some people are born anosmic.

Moreover, in many cases of Covid-19, smell loss can linger long after the virus is gone and people are no longer contagious – a complication that could land some people in a post-Covid purgatory if they are forced to rely on smell screens to resume activity, Yan said.

There are also many ways to design a smell-based screen. Odours linked to foods that are popular in some countries but not others, such as bubble gum or liquorice, might skew test results for some individuals. People who have grown up in highly urban areas might not readily recognise scents from nature, like pine or fresh-cut grass.

Smell also is not a binary sense, strictly on or off. Reed advocated a step in which test takers rate the intensity of a test’s odours – an acknowledgment that the coronavirus can drastically reduce the sense of smell but not eliminate it.

But the more complicated the test, the more difficult it would be to manufacture and deploy speedily. And no test, even a perfectly designed one, would function with 100 per cent accuracy.

Dr Ameet Kini, a pathologist at Loyola University Medical Center, pointed out that smell tests would not be free of the problems associated with other types of tests, such as poor compliance or a refusal to isolate.

Smell screens are “probably better than nothing,” Kini said. “But no test is going to stop the pandemic in its tracks unless it’s combined with other measures.” – New York Times