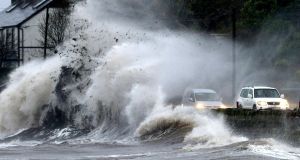 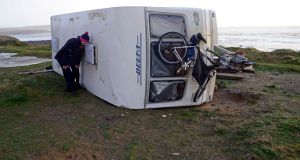 An overturned caravan near the beach at Garretstown, Co Cork. Photograph: Denis Boyle 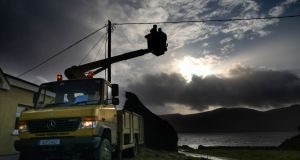 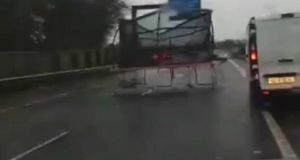 Drivers had to contend with a trampoline which was blown on to the M7 motorway outside Limerick this morning. Photograph: Michael Finnan via Twitter

Households, businesses and councils were on Monday night counting the cost of Storm Brendan as some homes were left without power overnight.

The ESB was attempting to restore power in the aftermath of the Atlantic storm as thousands were left without power and trees were felled countrywide.

An Orange wind warning with gusts of up to 130km/h in exposed areas was extended until midnight in Donegal, Galway, Leitrim, Mayo and Sligo.

A status Yellow wind warning was in place for 10 other counties.

There was concern about flooding during the evening high tide in counties Galway, Clare, Mayo, Sligo, Donegal and Kerry.

The ESB restored power to 100,000 homes, farms and businesses over the course of Monday. Power cuts had been reported across the country, with Galway, Limerick, Kerry, Cork and Donegal among the worst affected areas.

Winds started to ease along the west coast early on Monday afternoon, although a second belt of strong gusts was forecast for the evening.

The Coast Guard repeated its warning for people on the coast not to approach breaking waves during the storm.

In Howth, Co Dublin, the Coast Guard said it had “investigated reports of people putting themselves at risk during Storm Brendan”, and spoke to many people around the harbour and seafront between Howth and Clontarf.

Video footage and photographs showed waves crashing over the walls along Dublin Bay in Clontarf, Howth and Coliemore Harbour in Dalkey, as well as people standing near large waves .

Storm Brendan made landfall on Monday morning, bringing gusts of almost 100km/h over northeast counties and more than 140km/h off the coast of west Cork.

Three trampolines were blown onto motorways, two on the M7 near the University of Limerick and near Oola in Co Tipperary, and the third near Junction 9 on the M9.

The ESB said its crews restored power to more than 100,000 homes, farms and businesses during Monday, with 32,000 without power as of 6pm. At its peak 50,000 ESB customers were without supply.

“High winds during daylight hours have hampered restoration efforts and have also caused further losses in supply,” said the ESB.

“We expect the majority of those without power at the moment to have supply restored tonight [Monday night], though some families will be without power overnight. High winds [are] expected in the west and northwest this evening, so further cuts are possible.”

The ESB said the damage was mainly due to fallen trees on overhead lines as a result of the winds.

It urged the public not to approach or touch fallen trees, wires or damaged electricity networks as they may be hazardous.

Motorists and road-users were advised to exercise caution due to debris on routes, while cyclists are advised to avoid unnecessary journeys while the Orange wind warning remained in place.

Irish Ferries has not cancelled any Dublin-Holyhead sailings. However, the Dublin to Holyhead 2.30pm service was delayed due to adverse conditions. Stena Line crossings were also delayed.

Flood defences erected along Dublin Bay will remain in place until Wednesday morning.

In advance of the storm car parks were closed and flood defences put in place in Clontarf, Sandymount and along parts of the river Dodder in Dublin.

Further high tides are expected at 2pm on Tuesday, according to a council spokesman. “Dublin City Council will continue to monitor and take necessary action over the coming days,” he said.