Children’s hospital board head to be quizzed on cost increases 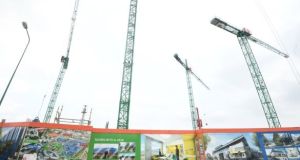 The head of the board of the national children’s hospital is to be questioned on potentially significant cost increases in the project as well as the timeline for completion of the building.

In a letter to Fred Barry the chairman of the National Paediatric Hospital Development Board (NPHDB), the clerk of the Oireachtas Committee on Health said questions must also be answered about the resignation of Paul Quinn from the board. He is the Government’s chief procurement officer.

Mr Barry and his colleagues are due to appear before the committee on Wednesday.

According to the letter, committee members want to question the board “in relation to cost over overruns, continuing construction claims, safety issues, and the resignation from the board of Mr. Paul Quinn, the State’s chief procurement officer.”

It emerged earlier this month that the board of the hospital is reviewing “significant potential costs” arising from new financial claims made by contractors.

In a letter to the Public Accounts Committee (PAC) the chief officer of the National Paediatric Hospital Development Board, David Gunning, said the board would defend itself robustly against the new claims which sources say could push the cost of the project higher.

“The NPHDB is also reviewing significant potential costs as additional claims are presented from the contractor. The NPHDB is diligent in its examination of these claims and is providing a robust defence in relation to these in line with the PWC recommendations that the board has implemented,” the letter stated.

“In addition, and in accordance with the construction contract, there is a dispute management process in place to deal with these claims through the appointment of a standing conciliator.”

Meanwhile, at meeting of the NPHDB in September, minutes of which have been seen by The Irish Times, members discussed “risks associated with inflation.”

Furthermore “three key project risks” were discussed although much of this part of the document contains redacted text.

“Three key project risks were flagged to the board. The consequences of each of these risks and the mitigation measures being implemented in response were discussed and noted. It was further noted that the executive had been engaging with the design team at quarterly workshops in relation to the mitigation of risks,” minutes of the meeting say.

Political sources believe this cost is likely to escalate, potentially significantly, given the level of extra claims being made by contractors.