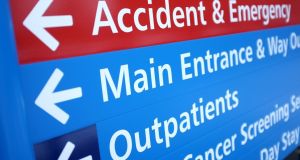 Most people surveyed said they trusted and had confidence in hospital staff. Photograph: iStock

Just 30 per cent of people who attend a hospital emergency department are admitted to a ward within the HSE’s six-hour target time, according to a national survey of patients.

Four per cent of the 12,000 patients who were surveyed said they were forced to wait over 48 hours before being admitted.

Long waiting times are linked to negative health outcomes and pose a risk to patient safety, according to the Health Information and Quality Authority, which carried out the survey.

Now in its third year, the National Inpatient Experience Survey shows some areas have improved over 2018, with patients reporting more positive experiences of discharge or transfer procedures. Questions on dignity, respect and privacy scored highly, and most people gave a very positive rating for the cleanliness of rooms or wards. Most people also said they trusted and had confidence in hospital staff.

However, many people said there was not enough time to discuss their treatment with medical staff, and felt they were not fully involved in decisions about their care or their discharge from hospital.

Some 28 per cent of respondents described the food they received in hospital as poor or fair.

Responding to the survey findings, director of the National Care Experience Programme Rachel Flynn said: “Although the majority of patients reported positively on their time in hospital, a large number of patients did not. Significantly, women and younger people tended to report less positive experiences than men and people over the age of 50, as did patients of larger hospitals.

“While discharge planning has improved, there is still more to do, with many patients saying that they did not receive enough information on their condition, their medication or how to care for themselves at home.”

HSE chief Paul Reid, thanking those who participated along with hospital staff, said, “It is important that we listen to and learn from our patients so that we can continue to improve patient care.”

The survey is based on questionnaires given to all inpatients in 40 hospitals last May; over 12,300 patients participated, giving a response rate of almost 50 per cent.