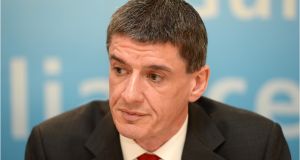 Ian Drennan said he “remained available to assist the committee in whatever way possible and would attend before the committee on whatever date specified in due course.” Photographer: Dara Mac Dónaill / THE IRISH TIMES

The Director of Corporate Enforcement, the State’s company watchdog, may appear before an Oireachtas committee this year in what would be a first appearance before a parliamentary committee in nine years.

The Oireachtas Joint Committee on Business, Enterprise and Innovation has said that it may examine the Officer of the Director of Corporate Enforcement (ODCE) as part of its scrutiny of the Government’s proposed legislation strengthening the agency that polices company law.

The legislation was introduced in response to the collapse of the trial of the former Anglo Irish Bank chairman Seán FitzPatrick and criticisms made by Judge John Aylmer, the trial judge in the FitzPatrick case, of the ODCE’s investigation and how it mishandled the taking of evidence from key witnesses.

No ODCE officials have appeared before the committee since Ian Drennan’s appointment as director in 2012.

The ODCE’s investigations into transactions and events leading up to the collapse of Anglo in the financial crisis dominated the corporate watchdog’s workload for the intervening period.

A spokesman for the committee said that it has yet to finalise its programme of work for this year but ODCE-related matters and scrutiny of the new legislation “may feature in that programme.”

Mr Drennan told The Irish Times that he “remained available to assist the committee in whatever way possible and would attend before the committee on whatever date specified in due course.”

Correspondence with the Oireachtas committee released by the ODCE under the Freedom of Information Act shows the protracted efforts in 2017 and early 2018 to organise an appearance by Mr Drennan.

The committee acknowledged in a letter dated February 22nd, 2018 that Mr Drennan was available to meet on “a date yet to be specified” and decided the meeting would not take place until after the criminal trial of former Anglo Irish Bank chief executive David Drumm after Mr Drennan raised concerns.

Mr Drumm’s criminal trial came to an end in the summer of 2018 after he was sentenced to six years for conspiracy to defraud and false accounting.

Mr Drennan has been willing to appear under the ODCE’s accountability obligations to the Oireachtas since it first requested that he attend a hearing in May 2017 after the collapse of the FitzPatrick trial.

In December 2017, ahead of a planned appearance (since postponed) before the committee, Mr Drennan offered to provide a 415-page submission in advance on the issues that contributed to the judge’s decision in the FitzPatrick case so that the committee could consider the issues “on a properly informed basis.”

Mr Drennan asked the committee for a private hearing because of his concerns about the exposure of the ODCE to litigation and “financial risk” from individuals named in his submission including current and former staff members of the ODCE. He agreed to attend a public hearing after the private sitting.

The committee later told him they did not intend to discuss the FitzPatrick case but more general matters concerning the ODCE, including the number of prosecutions brought by the director in the past decade.

Mr Drennan told the committee on February 7th, 2018 that he was still willing to appear but said that the number of prosecutions brought by the ODCE in the past decade “cannot meaningfully be considered or discussed without reference to the ODCE’s Anglo-related investigative work” and subsequent trials.

Other investigations “could not be pursued when investigative/enforcement staff (including gardaí assigned to the ODCE) were consumed by the ODCE’s Anglo-related trials and associated activities,” he said.