Coronavirus testing to rise sharply in Ireland as treatment streamlined 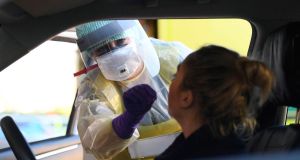 It is planned that patients with mild symptoms will recover in isolation in the community, rather than in hospital, where all coronavirus cases are being treated at present. Photograph: Michael Cooper/PA Wire

The testing of people for coronavirus and the treatment of confirmed cases is to be streamlined as the number of Covid-19 diagnoses continues to rise here.

Another five positive tests for the disease – three women and two men – were announced last night, with Northern Ireland also recording another case.

This brings to 18 the number of confirmed cases of the virus in the Republic and four in the North.

It is planned that patients with mild symptoms will recover in isolation in the community, rather than in hospital, where all cases are being treated at present.

International data shows four out of every five people who get the disease suffer mild symptoms. The number of people infected with coronavirus is nearing 100,000 across the globe, the World Health Organisation (WHO) said on Friday.

Staff at some Irish hospitals will be be trained to provide testing facilities regionally, it is expected. The National Virus Reference Laboratory in University College Dublin currently processes all tests. Up to last week, almost 400 people had been tested, but this number is expected to have risen sharply when new figures are published early next week.

Other health service staff are to be drafted in to assist the 60 or so public health professionals who specialise in tracing contacts of people with infectious diseases. The requirement for contact tracing has escalated hugely since the number of cases grew in recent days.

Three of the new cases in the Republic are in the south of the country, one is in the east and one in the west.

The State’s chief medical officer Dr Tony Holohan described 18 as “a small number of cases” and pointed out that the origins of all but one could be explained.

“We are still in a containment phase and the chance of picking up this disease remains very low.”

Hospitals in Cork and the midwest, and Dublin’s Mater hospital, where cases are being treated, have introduced visitor restrictions and many elective surgeries have been cancelled. Private nursing homes across the State have also restricted visiting to minimise risk to “vulnerable” older residents.

We need to act in concert, and if the response needs to be escalated we should escalate it altogether

Trinity College Dublin, which has one confirmed case among its student body, has introduced a ban on entering the college for 14 days for staff and students returning from northern Italy or other high-risk areas.

Ireland’s fifth round Six Nations clash away to France on March 14th will go ahead, the French Rugby Federation confirmed. Organisers of the St Patrick’s Day parade in Youghal, Co Cork announced their decision to cancel this year’s event.

Taoiseach Leo Varadkar urged people “not to act unilaterally, whether that is crèche owners or business owners or event organisers”. “We need to act in concert, and if the response needs to be escalated we should escalate it altogether.”