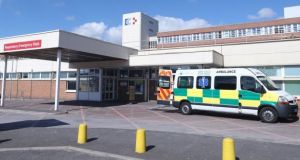 The affected members of staff all work at Craigavon ambulance station in Co Armagh.

The Northern Ireland Ambulance Service (NIAS) said 10 members of staff from the Southern Division who attended a social event outside of work had tested positive for Covid-19.

“The situation is being managed in line with public health guidance and NIAS procedures,” a spokesperson said.

The chief executive of the NIAS, Michael Bloomfield, told BBC Radio Ulster that none of the ambulance workers with Covid-19 were seriously ill, and he hoped to see most of them return to work very soon.

He said at the time of this trip the regulations in place stipulated a maximum of 15 people could meet outdoors. “They did not break that,” he said.

Mr Bloomfield said a NIAS internal review had “established that this was a community transmission, it was not contracted through work.

“We believe the first person tested positive on September 13th, we believe contracted that through a family member,” he said.

“As a result of number of staff being away together for a number of days” on a “golf trip”, he said, the infection was passed to the other members of the group. “Very rapidly a number of others tested positive,” he said.

It has been reported that the golf trip was to the Republic of Ireland.

Of the 15 people who were on the trip, Mr Bloomfield said, 12 were ambulance staff. Ten of them tested positive for Covid-19, and two did not.

He said that only one person had returned to work following the trip before subsequently testing positive. That individual was in contact with four colleagues, who are self-isolating, but no patients.

“There were no patient contacts whatsoever as a result of these staff testing positive,” he said.