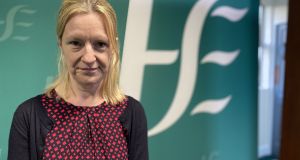 Bernie Waterhouse: ‘Now that so many of the staff are vaccinated, they feel so much more protected working on a Covid ward.’ Photograph: Ronan McGreevy

A nurse manager on a Covid-19 ward said she is “delighted and honoured” to be the first healthcare worker to be fully vaccinated.

Bernie Waterhouse, who works in St James’s Hospital in Dublin, received the second dose of the Pfizer-BioNTech vaccine on Tuesday having received the initial dose on December 29th.

Apart from some brief soreness in her arm, she has had no ill-effects from the vaccine and is looking forward to seeing friends and family she has not seen for the last year.

Though she is now protected against the disease, she still wears a mask on the wards as it is not yet clear if vaccinated people can infect others.

She said all frontline care workers lived in fear of getting the disease or passing it on to vulnerable relatives. Many have not seen their parents for many months.

“I was always concerned about transmitting the virus outside of work. It is a bit like getting the flu vaccine. I had no symptoms afterwards,” she said.

“Now that so many of the staff are vaccinated, they feel so much more protected working on a Covid ward.”

A recent seroprevalence study carried out by the Health Service Executive (HSE) reveals that 15 per cent of the 4,700 healthcare staff in St James’s Hospital have antibodies for Covid-19 which means that have been infected by the virus. Some 3,500 vaccines have been given to patients and staff at St James’s to date.

Ms Waterhouse said the third wave of the virus has been worse than the first. In early December, just six patients on one ward in St James’s Hospital had Covid-19, that figure is now 102 patients on six wards with 22 in ICU.

Speaking at the weekly HSE briefing on Covid-19, she gave a graphic account of the pressure on frontline staff.

There have been days which have been “hugely stressful” with deaths and admissions to ICUs. Many patients “deteriorate very quickly and they die very quickly”. She said the pressure on medical staff was such that a lot of patients could not get the care they needed.

Some of the staff in the hospital have been out for the last 10 months having tested positive for the virus in the initial wave, she said, and staff morale was low because of absences. During the week that the vaccinations started at the end of December, 12 out of 21 staff were out as a result of Covid-19.

It is impossible to spend as much time with patients on the Covid-19 wards because of the demands of PPE, she said.

In the initial stages relatives were not allowed into hospitals and a lot of patients died on their own.

Initially too, relatives asked for photographs of dead patients as the bodies had to be put into body bags straight away. Because of PPE, relatives are now allowed in, though families cannot visit together in a hospital.

She added that the vaccinations provided real hope for people and new treatments have kept patients alive. There is a high flow oxygen technique that was not used in the first wave, new antibiotics and steroids.

“We’ve learned a huge amount in the last year,” she said.

The ward she works on now has a Spotify account to play music for people who are dying.