South Dublin death being treated as unexplained by gardaí 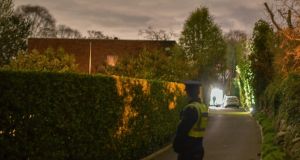 The body of the woman was found in the house in Killiney, Co Dublin. Photograph: Michael Chester

Gardaí are investigating the death of a woman in unexplained circumstances at a house in south Dublin on Tuesday.

An investigation has been opened following the discovery of the body of the female in her 50s in a house in Killiney.

The house is located on Balure Lane - a small road of large family homes off Church Road near Killiney Golf Club.

The scene of the discovery was being preserved on Tuesday night to allow for a full forensic examination after gardaí were alerted earlier in the evening.

A Garda spokesman said the course of the investigation would be determined by a post-mortem on the victim which is scheduled to be carried out on Wednesday.

The circumstances of the death are being investigated by gardaí from Dún Laoghaire.