Haulage Association calls for other ferry operators to follow suit 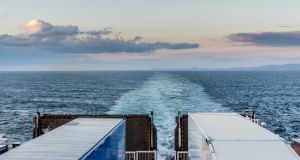 It was feared the practice of drivers having to share cabins on ferries could lead to the spread of the coronavirus. Photograph: Getty Images

P&O Ferries, who operate a major freight link between Dublin and Liverpool, and Britain and mainland Europe, has moved to provide haulage drivers with single occupancy cabins to reduce risks of the coronavirus affecting supply chains.

In recent days the Irish Road Haulage Association (IRHA) called for the Government to direct ferries transporting goods and vital supplies to prioritise the safety of lorry drivers on board.

The haulage association raised concerns that steps were needed to protect lorry drivers given they may be required to drive routes through areas badly affected by the coronavirus in mainland Europe.

It was feared the practice of drivers having to share cabins on ferries operating between the UK and Ireland, and mainland Europe and Ireland, could lead to the spread of the coronavirus, officially known as Covid-19.

P&O Ferries, a large British firm who transport hauliers, announced it had “taken the decision to offer drivers single occupancy cabins only with immediate effect,” in order to reduce risks to drivers and ferry crew members.

Previously two lorry drivers would often share a cabin on board ships during journeys.

Tony Goodwin, general secretary of the IRHA, welcomed the “unequivocal” decision by P&O Ferries, and called for other ferry operators such as Irish Ferries, Stena Line and Brittany Ferries to follow suit.

Previously several of the other operators told the association they would provide single cabins for lorry drivers “where available,” which Mr Goodwin stressed did not go far enough.

“Priority has to be given to goods transport. What we are talking about here is food, medicine, sanitary products,” he said.

The haulage association has written to Minister for Business Heather Humphreys and other Ministers seeking a direction on the issue, calling for freight to be given priority over tourism in order to ensure the continued supply of food, cleaning and sanitary products and medical supplies.

5 Covid-19 vaccines: Questions about the unknown