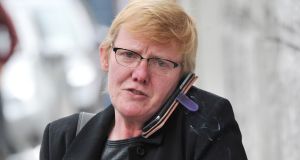 A 51-year-old woman who stole more than €200,000 from her employer over 13 years has been given a five-year suspended sentence after she repaid the money and a judge heard she was unlikely to reoffend.

Margaret McCarthy Creedon from Sally Gardens, Millstreet Road, Macroom, Co Cork pleaded guilty to six sample charges, from a total of 50, that she stole €205,000 from Macroom Haulage between 2000 and 2013.

Judge Gerard O’Brien had adjourned the matter at Cork Circuit Criminal Court until yesterday to allow Ms McCarthy Creedon, a mother of three, be assessed for community service but he said that the offences were too serious and had to be marked by a sentence. He said that the greatest aggravating factor in the case was the fact that her offending was not a one-off, spur-of-the-moment matter but had continued for 13 years, including at times when she was aware the company was struggling to survive.

The judge said Ms McCarthy Creedon had repaid the money, pleaded guilty and had no previous convictions. He also noted that she had suffered considerable public shame in her community.

But he had to mark the seriousness of the offences: he would suspend the five-year term on condition that she be of good behaviour for five years.