‘When it comes down to the rub, it is much closer to 1995 in terms of urban/rural split’

Together for Yes and Save the 8th campaigners talk about strategy and how they think their respective campaigns are going so far. 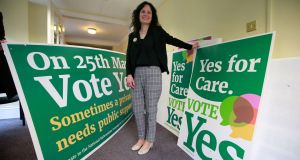 The Yes Together HQ in Mount Street, Dublin which is run by campaign manager Deirdre Duffy. Photograph: Nick Bradshaw

“Get there firstest with the mostest”, was the cardinal rule of US civil war general Nathan Bedford Forrest.

The Yes and No campaigns in the referendum on the Eight campaigns seem to have taken that approach to heart. Both are trying to hit the max on every imaginable metric – posters, volunteers, funding, social media reach, communications and messaging.

Inside two rambling Georgian buildings on either side of the Liffey are the nerve centres of Together for Yes campaign, and the opposing Save the 8th.

When it comes to the the mechanics of a campaign, there are strong similarities. Both have borrowed heavily from the playbook of the same-sex marriage referendum.To borrow from the pocket dictionary, the Yes side is “all in” with an emphasis on celebrity endorsement, prominent influencers, artistic events, Repeal gigs and quirky videos.

The less of the same-sex referendum is not lost on the No campaign either. It too has appropriated colourful designs, hoodies, button badges, road shows, and slick use of video and social media (although not with the same reach as Yes). On the doors canvassers from both sides are ultra-polite and engage viscerally.

It is 10am in the Together for Yes building on Mount Street. It’s a massive Georgian building, formerly a business college. Inside the hall, it looks like a hoarder lives here: stacks of posters along walls, boxes of leaflets, colourful literature. In reception, bags marked “Galway”, “Cork” and “Sligo” have been stuffed with hi-viz vests.

More than 30 people crowd into one of a warren of rooms along an endless corridor. A smattering are veterans of the same-sex marriage campaign. This is the daily strategy meeting, where everybody gets briefed on all events of the previous day and plans for that day. People give updates on the drive to register younger voters, on fundraising, gigs and events, social media activity, big theme of the day (parents who experienced fatal foetal abnormality) and on the next big move of the campaign, which is a regional roadshow, kicking off in Athlone on Sunday.

Deirdre Duffy is campaign manager: “We have developed our own campaigning tool here that allows us to get real time information from the doors.

“Every morning when I wake I look at how we are reaching on the airwaves, and can tell straight away what was said on the doors the previous night. We are using that information here in HQ to strategise on a weekly basis, a daily basis and an hourly basis.”

At this stage, three weeks out, it is all about “mobilisation” and conversations, she and co-director Orla O’Connor says. With so many undecided voters, both sides have devoted huge energy and time to those “conversations”, both real and virtual. In the last 10 to 14 days, she says, the emphasis will be put on getting out the vote.

In her compact office, communications manager Amy Rose Harte is surrounded by a dozen whiteboards. Some list the names of contacts for interviews such as doctors, nurses, lawyers, parents, and people with personal experience. Another lists details of the big TV debates that are upcoming.

“I need to have it all visually laid out in front of me,” she explains. The communications team is big, 20 in all.

“The international media interest in this referendum is extraordinary – from Zambia to Belgium,” she says. “We get calls from the UK on a daily basis. A call from Denmark yesterday. We have a French journalist today.”

Where support is weakest is rural Ireland and there is huge emphasis on regional media (Harte stresses this several times) and on highlighting its regional road show. At present there is a press conference every two days but they will become more frequent.

The Save the 8th headquarters is a more modest building, on Gardiner Place. Inside it looks like an advertising agency, albeit a cluttered one. There is bright branding everywhere and upstairs graphic designer Rebecca Roughneen sits in front of a teal-coloured backdrop with a subtle Save the 8th graphic. It will be used for a stream of social media videos.

It’s a smaller operation with between 20 and 30 working here. But then the No campaign is being run by two similarly sized organisations, separate but which co-ordinate. The Irish Times did not get access to the Love Both campaign headquarters for this article.

There are so many different roles. Gary Kavanagh is the researcher, who provides data to back up assertions, like the UK’s abortion rate. Dublin canvass manager Donagh O’Callaghan is sending out 40,000 booklets that “might last a week”. He believes No is stronger than some believe in what’s seen as its weakest area. “Teams are giving us feedback which is not false BS. We are fairly confident we can swing a few places our way,” he says.

The media team here is more modest but the issues and strategies are the same. On the top floor, in a large room used for press conferences, where campaign chairwoman Niamh Uí Bhriain and communications director John McGuirk are discussing the theme for the poster for the final week of the campaign. Upcoming events are a nurses and midwives press conference and a “Disability Voices” campaign. Press officer Abigail Malone also fields a huge number of international queries. She talks of difficulties getting a right of reply in a media environment she says is tilted to the other side.

McGuirk says there are 115 teams out canvassing: “On any given night we have 1,200 people across the country. We will hit our target of talking to between 700,000 and one million people.”

Downstairs, logistics manager Ida O’Hare is arranging a batch of 20,000 posters for distribution. She says they will replace the thousands that have been torn down by opponents.

Her counterpart on the Yes side, Orla Howard, is doing the same: 22,000 lamp-post posters as well as 10,000 smaller posters. Again she refers to posters being torn down in Mayo, Drogheda and Longford. With each poster costing €10 it’s a €250,000 bill for both sides. The Yes side did have huge success with a crowd-funding drive that raised 10 times more than the target. That has allowed it get what Howard says is “parity” on the poster front.

The online campaigns are huge. The Together for Yes side has a social media team of four. “Twitter was massive for us on crowd funding with 40 per cent coming from there,” says manager Sarah Clarkin. “Facebook for us is where the undecided voters are. Our strategy is to get our message out there. we have reached one million people . . . ”

That’s been achieved by videos (a Peter Boylan video reached 200,000) and “influencer” endorsements, as well as “trusted independent sources”.

The No side also has a well-honed social media strategy, though with less reach. The feeds are video-heavy but the campaign says it gets huge feedback, particularly from backend messages (where people respond privately).

Together for Yes has three co-directors: Ailbhe Smyth; Grainne Griffin; and Orla O’Connor.

When you talk to both sides they are acutely mindful of the other campaign. You sense Yes is worried about rural Ireland, as is No about the capital. O’Connor, for her part, criticises the “endless funds” the No campaign seems to have for online advertising. McGuirk claims Yes is avoiding the issue of abortion itself. “There has been a lot of Yes for Love, Yes for compassion, Yes for Kindness, and Yes for Kittens . . . The Yes campaign is trying to hope nobody will notice we are discussing abortion.”

It’s clear O’Connor is not doing that in her own summary of where the campaign is at.

“I think it will be very tight. Abortion is a very difficult issue for a lot of people. They have a lot of reservations and they can be uncomfortable talking about. That is why going back to the piece of having the conversations.

I think we have moved the dial on that one

“It’s also about saying to people that you personally may not agree but it is necessary and we need to provide it for women and for couples.”

Uí Briain is her equivalent on the No side. “Trying to make people aware of how liberal the policy is will be a key part in the next few weeks. I think we have moved the dial on that one,” she says.

“In a referendum every vote counts. We are not neglecting areas in Dublin where we feel we can get swing people to a No and get out those votes. It is the same for the rest of the country. We believe people think this goes too far.”

There are superficial similarities to the 2015 referendum but O’Connor is right: when it comes down to the rub, it is much closer to 1995 in terms of the urban/rural split and the existence of a determined and well-organised No campaign.