Cork woman threatened to kill ex-husband and set him on fire with petrol, murder trial told 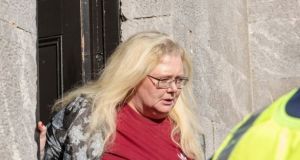 Rita O’Driscoll from Bridge Street, Bandon, Co Cork denied both the murder and assault charges when she was arraigned before a jury of five men and seven women at the Central Criminal Court sitting in Cork. File photograph: John Delea

A mother of two charged with the murder of her ex-husband made several threats to kill him, including threatening to pour petrol over him and set him alight, her trial heard on Thursday.

Lizzie Foley told the murder trial of Rita O’Driscoll (48) that she overheard her threatening her uncle, Ms O’Driscoll’s ex-husband, Timmy Foley (44) so often that she came to think of it as almost normal behaviour from her.

“One occasion, I heard her say over the phone ‘I will pour petrol over you and set you on fire’ - I just thought it was general Rita - I didn’t think she would follow up on it - she said that sort of stuff so often it was almost normal.”

Ms Foley was giving evidence on the sixth day of Ms O’Driscoll’s trial for the murder of Mr Foley and assault causing serious harm to her other uncle, Jason Foley (43) at Dan Corkery Place in Macroom, Co Cork on October 8th, 2018.

Ms O’Driscoll from Bridge Street, Bandon, Co Cork denied both the murder and assault charges when she was arraigned before a jury of five men and seven women at the Central Criminal Court sitting in Cork.

Ms Foley also told the jury on Thursday that she used to visit Ms O’Driscoll at her home in Bandon where she lived with her son, Michael and daughter, Chantal after she separated from Mr Foley who was living in Macroom.

Ms Foley said that she was quite close to her cousin, Michael and used to visit him two or three times a week. She regularly heard Ms O’Driscoll being threatening towards her former husband, particularly when she was drinking, Ms Foley said.

“I heard her say once ‘If I can’t have him then no one will’,” said Ms Foley, adding that Ms O’Driscoll usually got on well with her son, Michael but they would row after she had been drinking.

Ms Foley said that five weeks before Mr Foley was stabbed to death in Macroom, Ms O’Driscoll said she was going to Jason Foley’s house in Macroom with a bag of alcohol to see her former husband.

She said Ms O’Driscoll’s son, Michael told her that his father didn’t want to see her but Ms O’Driscoll said she didn’t care.

“She said it was her life, she was a middle-aged woman and she could do what she liked,” she said.

Ms Foley said Ms O’Driscoll used to bring over alcohol to Timmy Foley in Macroom as a means of gaining access to him but she did not like her former brother-in-law, Jason who had suffered an acquired brain injury.

Asked by defence counsel, Roderick O’Hanlon SC if she knew Ms O’Driscoll suffered from a bi-polar disorder, Ms Foley said she knew she suffered from mental illness and was receiving psychiatric treatment.

“I was friends with Mike and he mentioned to me that they (Ms O’Driscoll and Mr Foley) weren’t officially divorced but he did say that his dad didn’t love her anymore,” said Ms Foley.

The trial also heard evidence from Det Grda Mike Thompson of the Computer Crime Investigation Unit who examined a number of mobile phones found at the house where Mr Foley was found with 28 separate stab wounds.

Among the phones he examined was an Alcatel belonging to Mr Foley and a Samsung phone belonging to Ms O’Driscoll. He found a number of text messages on both which he retrieved as part of the investigation.

Det Garda Thompson told the court that he retrieved a number of texts which Mr Foley sent to Ms O’Driscoll including one where he told her “U R a sick, Let go, yeah” and another where he told “F**k you and let it be, yeah”.

He also found a text message in which Mr Foley mentioned Sarah Hussey with whom he was involved in a relationship, telling Ms O’Driscoll that “I love Sara and I love f**king Sara. She is my life”.

He found messages on Ms O’Driscoll’s phone which were sent to Mr Foley, including one which said: “Look, Timmy, I don’t want no arguing - I am happy to be your friend - I will always be there if you need a listening ear.”

He also found texts on her phone which said: “Look, Timmy you have a good heart. All I want is for you to be happy, and “Follow your heart. I don’t hold any grudges. I want the best only for you. Good f**king luck to ye”.

And he also found texts on Ms O’Driscoll’s phone where the message stated: “I don’t care. Go with who you want. I hope you treat her better than the way you treated me’; and ‘Don’t ever take me for a fool.”

Det Garda Thompson also told the trial how he found texts on Ms O’Driscoll’s phone which had been sent to the phone of Sarah Hussey with whom Mr Foley had embarked on a relationship.

One text message retrieved from Ms O’Driscoll’s phone which had been sent to Ms Hussey stated: “On my dead mother, I will do life. I am a Traveller girl. Just wait and see.”

Another found on Ms O’Driscoll’s phone said: “I have a lot of contacts in every corner. You will get it girl. So get out of the country.” While another said: “Why go for a married man; ‘I am telling you, take heed and get a single man.”

Another retrieved from Ms O’Driscoll’s phone stated: “Take a warning. Stay away from my husband and stop contacting him. If you don’t, you are going to be sliced. And I know where you are and I’m not worried about guards.”

And another found on Ms O’Driscoll’s phone said: “You are dead when I get a hold of you. I won’t pull it out, streetwalker. On my way to Macroom now. And listen, I don’t care about guards.”